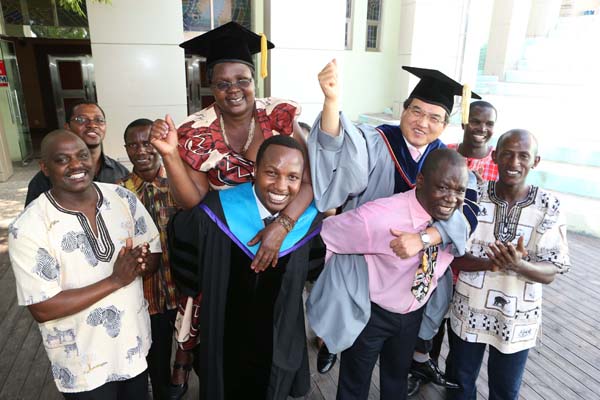 Benson Kamary, a 30-year-old Kenyan from the Maasai tribe, center, celebrates his completion of a doctoral degree at Kosin University with his mother and others on Tuesday. By Song Bong-geun

BUSAN - A 30 year-old Kenyan from the Maasai tribe has earned a doctoral degree at Kosin University in Busan and is set to become an education professor at the university.

Benson Kamary was born into the Maasai tribe in Kitale, an agricultural town in western Kenya between Mount Elgon and the Cherengani Hills.

He lived barefoot until he graduated from middle school and grew up listening to tales of his ancestors. His family was of modest means, but they recognized Benson’s academic talent and supported his studies. He graduated at the top of his middle school and entered high school on a scholarship. He went on to Daystar University in Nairobi, majoring in communications and becoming the first person from his town to graduate from university.

His ties with Korea began when Kim Sung-soo, the president of Kosin University, met Kamary at his college graduation ceremony. Kim suggested the Kenyan come to Korea to further his studies. The university offered him a scholarship and free room and board. Kamary started attending the school in 2008, taking his masters and then his doctorate.

The JoongAng Ilbo sat down with the Kenyan to learn more about his experience here in Korea.

Q. How did South Koreans treat you when they learned you are Maasai?

A. They believe the Maasai still walk barefoot and have a unique way of walking. But now, in reality, many of them wear shoes. Korean people often ask me to do the “jumping dance.” And people perceive the Maasai as courageous and brave, so they don’t mess with me. (Laughs.)

How did you feel when you got your Ph.D.?

I got a lot of help from Koreans. I will try to return the favor by helping others and contributing to my community.

What was it like to live in Korea for seven years?

Korea is a prosperous country. I know Korea received financial assistance in the old days when it struggled to lift itself out of poverty. I hope that Korea will lend a hand in helping African countries fight poverty in the same way that other countries did for Korea in the past.