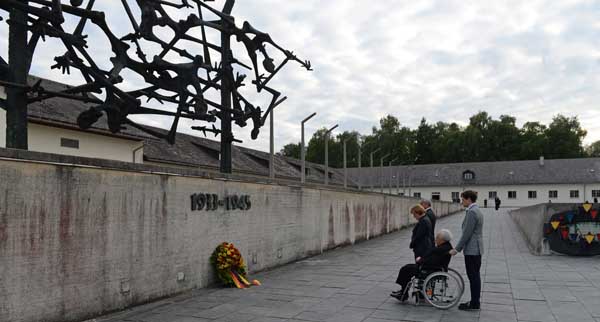 German Chancellor Angela Merkel attends a wreath-laying ceremony during a visit to the concentration camp in Dachau on Tuesday, where more than 43,000 persons were murdered and over 200,000 were imprisoned during the Nazi period from 1933-1945, in southern Germany. Merkel was invited by a former inmate, 93-year-old Max Mannheimer, who was liberated from Dachau by American soldiers in 1945. Merkel’s visit Tuesday evening was the first by a German chancellor to Dachau. Many Korean media outlets reported the visit to contrast Germany’s contrition for its war crimes with Japan’s continued denials. [AP/NEWSIS]