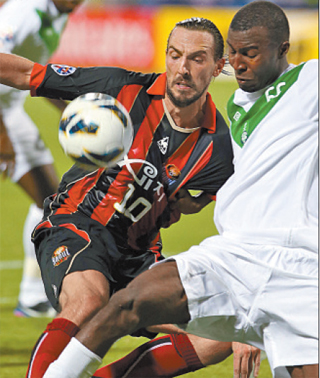 FC Seoul came closer to making its first semifinal appearance at the Asian Football Confederation Champions League by holding the 2012 ACL runners-up Al Ahli, of Saudi Arabia, to a 1-1 draw in the first away, quarterfinal leg on Wednesday.

Montenegrin striker Dejan Damjanovic put Choi Yong-soo’s squad ahead in the 10th minute, but substitute Sultan Al Sawadi levelled the score in the 80th minute for the hosts at Abdul Aziz Stadium in Buraidah, Saudi Arabia.

Choi said that his players became tired at the end of the game due to hot weather in Saudi Arabia and a long flight, attributing it partly to the team’s shift to defense in the second half. Still, he praised the players for “showing an aspiration to win” to the end.

“We still have 90 minutes left, and we will be thoroughly prepared for a home match so that we would get a result that we want,” he said.

FC Seoul, the only Korean club left in this year’s ACL, can reach the semis if it wins the second leg or has a scoreless draw. Its best result in the Asian tournament is the quarterfinals, which it reached in 2009 and 2011. The second leg will be held at Seoul World Cup Stadium on Sept. 18.

Al Ahli, which lost to Ulsan Hyundai, 3-0, in the 2012 ACL final in Ulsan in November, scored 16 goals in the 2013 edition, more than any other team. Korea’s Suk Hyun-jun is a striker for the Saudi team.

Choi expressed confidence about playing a game-decider at home, but cautioned against complacency.

“Football is an unpredictable sport. It is true that we are in a better situation of playing the second leg at home, but we can’t know the result until it is over,” Choi said. “But, I am certain that our players got confidence from today’s match.”

If Seoul get past Al Ahli, it will face off against the winner of Esteghlal of Iran versus Buriram United of Thailand in the semifinals, to be held home and away on Sept. 25 and Oct. 2. Esteghlal defeated Buriram United, 1-0, in the first leg on Wednesday.