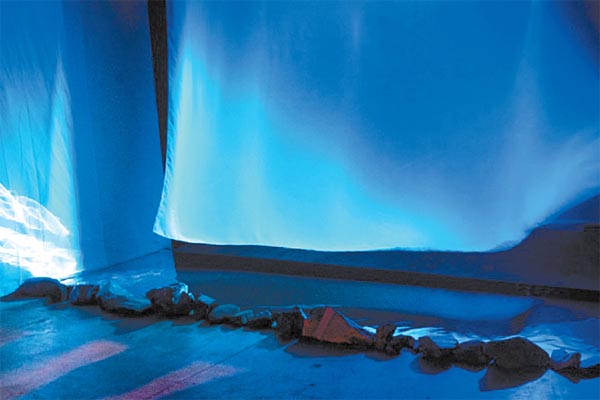 ‘Healing’ has been an important talking point in Korean society over the last few years, because many people complain of fatigue and pains in the aftermath of the country’s rapid economic growth, which was helped by intensive labor and competition.

Books about mental healing by psychologists and religious leaders have represented a large part of Korea’s best-seller list in the last few years.

Many music concerts with “healing” in their titles are also being held here and there. Now, art museums have also joined the move, holding “healing” exhibitions.

A remarkable exhibition among them is “Art Peace,” going on at Kumho Art Museum in the art zone east of Gyeongbok Palace in central Seoul. The works on display by seven teams of artists bring nature to viewers in novel ways using high technologies or provide a space to rest in unique styles. 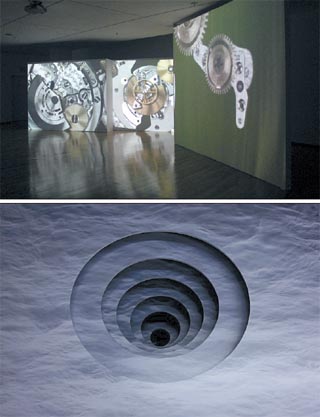 Among the works is Yoo Sang-jun’s installation work, “Distant Light,” on the museum’s second floor.

The work is a translucent curtain wall, which is slowly moved by gentle wind, with light behind the work coming through it.

Accordingly, it can be said that the work is made of light and wind and leads the viewers to focus on them and feel them. Light and wind are always with us but, because of this, we frequently forget their existence.

“Although light makes everything visible, light itself is not usually noticed because we mostly see the objects that it reflects against,” the artist wrote in an introduction for his work. “The relationship between light and shadow becomes the threshold of human perception.”

The motifs of nature also appear in some other works.

On the museum’s first floor is “Cloud Pink,” an interactive installation work that enables the viewers to touch drifting clouds and to divide clouds to see the blue sky.

How? The work is the installation of a fabric screen horizontally suspended in the air. An image of pink clouds drifting is projected onto the screen.

If a viewer pokes the screen with their fingers, a sensor leads a blue spot to appear on the poked point and to spread, just like that the blue sky appears between clouds.

“Lying down on a hill... you stretch your arms up to the sky to touch the clouds but can’t reach,” the media artist group Everywhere wrote in the introduction for the work.

“This is a work made to fulfill the little dream of ‘touching the drifting clouds.’?”

As the idiom, ‘catching the drifting clouds,’ is a Korean counterpart of ‘building a castle in the air,’ the work is more meaningful.

And Park Ki-jin’s works on the basement floor, titled “Discovery” series, present the image and sound of water, which the artist loves because “water is calm but changeable at the same time.”

Viewers can see the image of waves the artist took from the Antarctic sea projected onto the inside of a giant cylindrical object.

And they also can sit on a bench in the form of a concentric circle covered with the image of waves to hear the sound of icebergs breaking from the core of the circular bench.

And Guem Min-jeong’s media art “Confession of 3 minutes 45 seconds” in three video channels lead viewers to feel the detailed moment of time with the images of watch parts rotating and subtly vibrating, just like a heart beating or regular breathing.

“The perception of time is very subjective, depending on the person who perceives it and his or her psychological conditions,” Kim said.