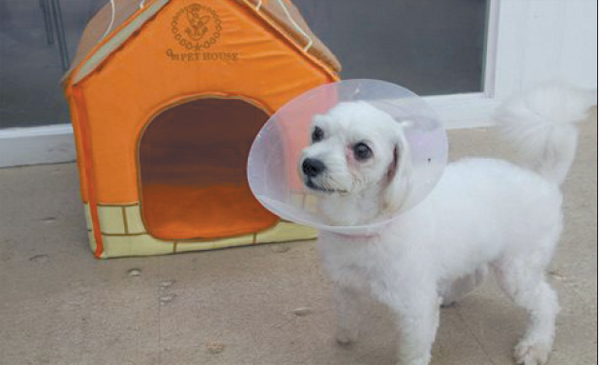 Suri, an abandoned Maltese, is this year’s mascot at the Animal Film Festival in Suncheon.Provided by the festival

The first-ever Animal Film Festival in Suncheon kicked off yesterday in the agricultural and industrial hub of South Jeolla. Celebrities like Kim Min-jun, Oh Yeon-seo, Gal So-won and the golden retriever Dal-i, the star of “Hearty Paws” and “Hearty Paws 2,” turned up to lend some glitz to the event.

Suncheon Mayor Cho Chung-hoon and Kim Dae-heui, chairman of Suncheon City Council, were also in attendance. Members of the popular variety show “1 Night, 2 Days” sent their warm wishes via a pre-recorded message, and Dal-i was given a Certificate of Appreciation recognizing him as the nation’s most famous canine actor.

Following a lively performance by the K-pop group Jewelry, the night took on a somber tone with the showing of a documentary about the festival’s mascot, a white Maltese named Suri, who was abused and abandoned before he was rescued and nursed back to health.

The eclectic mix of opening-night festivities encapsulated the heart of the new film. It hopes to entertain and pull on heartstrings while increasing awareness about animal rights activism in Korea and throughout the world.

Until Monday, some 50 films, all concerning animals, will be screened at local movie theaters such as CGV and Megabox, Suncheon Youth Center, and even at an outdoor location, Suncheon Jo-rye Lake Park.

Director Tim Gorski, who made the documentary “How I Became an Elephant,” will hold a talk tomorrow at the Suncheon Youth Center about how animals are treated in show business.

There will also be forums where activist groups like the Korean Animal Rights Association will talk about the significance of animals and the plight of abandoned dogs in Korea.

Pets are also welcomed at many of the festival’s events, and the festival’s Suncheon Bay Garden Expo will allow people to bring their canine companions.

There are also camping packages available and free shuttle buses from Busan, Daegu and Gwangju to Suncheon for those who have adopted pets. Proof of the adoption is necessary. Those wanting a seat on a bus can apply through the festival’s Web site: www.anffis.org.