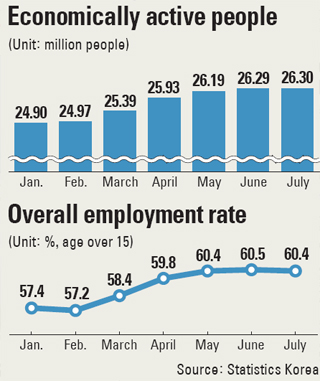 When President Park Geun-hye took office nearly six months ago, her economic goals were ambitious and varied, but the main goal was more robust growth for Korea.

Six months later she’s getting fair-to-middling grades for her accomplishments.

At the start, Park showed a strong will to boost the economy by announcing she would have a supplementary budget to stimulate growth. In April, she announced a series of policies to help the moribund real estate market.

In May, the government unveiled plans to boost IT start-ups to make the economy more creative, and to promote investment and exports. In June, her administration said it wanted to boost the country’s employment-to-population rate to 70 percent from the current 65.1 percent.

But the economy showed little improvement.

The Ministry of Strategy and Finance believes it’s possible to achieve 2.7 percent growth by the end of the year, saying that the economy has started to improve gradually on a quarterly basis. The ministry has confidence in achieving the goal given that growth was 1.1 percent in the second quarter, breaking the 1 percent mark for the first time in eight quarters.

“It is possible to achieve mid-3 percent growth in the latter part of the year,” said Hyun Oh-seok, deputy prime minister for the economy and finance minister, earlier this month. “The country will be able to reach its annual growth goal of 2.7 percent, owing to recovering exports and government policies starting to take effect in coming months.”

However, economic analysts have a contrasting view.

“It is insane to say the economy is improving while consumption and investment indices are falling,” said Sung Tae-yoon, an economics professor at Yonsei University. “The finance minister has made market conditions worse by failing to cooperate with the central bank and coming up with remedies for the moribund real estate market.”

Facilities investment fell in the first six months of the year compared to the same period last year. Monthly growth in retail sales remained below 1 percent throughout the same period.

“At the moment it seems impossible that growth will reach 3 percent as the government says,” said Kim Kwang-seok, a research fellow at Hyundai Research Institute. “Including the tapering off of U.S. quantitative easing and a possible financial crisis in emerging economies, there are growing external risks affecting the country’s exports.”

“The Park government has been making hard efforts to improve welfare benefits and employment conditions, which deserves a positive assessment,” Kim said. “But it’s too early to see the effect of those policies.”

The labor market is gradually improving with the number of newly employed people jumping in June to its highest level since last October. But there’s a long way to go to reach a 70 percent overall employment rate.

The rate for people aged 15 to 64, based on the OECD overall employment standard, was 65.1 percent last month, unchanged from June, but up 0.2 percentage points from a year earlier.

People in their 20s are still having a very difficult time finding jobs.

The number of employed twentysomethings dropped 80,000 in July, following a 35,000 decline in June.

“The most serious problem is the dearth of transactions in the property market,” Kim emphasized. “The government should do more to ease regulations on the housing market and boost transactions.”