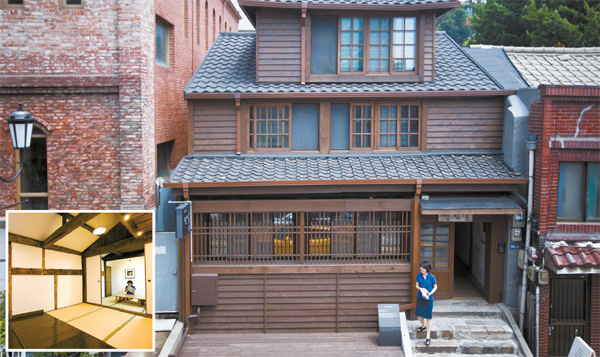 “Pot_R” is an old Japanese residence that was refurbished into a cafe. Many Japanese-style buildings from the colonial era have become cultural venues, as Koreans have recognized them as assets. By Kwon Hyuk-jae

The three-story, dark brown wooden house in the residential area in Jung District in Incheon stands out.

The port area - through which Korea opened its doors to Western countries in 1883 - used to be a home to settlements of many foreign countries and as a result, it is quite different-looking and exotic compared with residential areas in other parts of Korea. It is also where Chinatown - one of the biggest in Korea - is located.

Nonetheless, the house, which looks like it popped right out of a Japanese film, is so conspicuous that it makes passersby stop for a moment and wonder what kind of story it has to tell.

Whatever tale it holds, it’s now a cute-looking cafe named “pot_R,” selling beverages and desserts such as coffee and patbingsu, or shaved ice flakes topped with boiled adzuki beans and assorted toppings.

A century of changing hands

Located in what used to be a Japanese settlement in the late 19th century, the house is one of the few buildings in the area that preserves its original exterior and interior. In foreign settlements set up near Korean ports, foreigners enjoyed extra-territorial rights as well as their traditional culture among themselves.

The house, which was built sometime between 1890 and 1900, is in the form of Japan’s machiya housing, which are traditional wooden buildings that consist of a shop and living space. When you enter the rear of the house through a narrow hallway, you come across a courtyard, garden and small living quarters with tatami mats.

This house, in fact, used to house a cargo company that a Japanese citizen operated in those times.

The first floor was where the office was, and the rooms on the second and third floors were where about 100 Korean laborers lived - waiting for cargo ships to come in to Jemulpo Port, which is an old name for Incheon Port, when their major tasks began.

In particular, the room on the third floor had an unobstructed view of the port on the western coast of the Korean Peninsula without the high-rise buildings we see today. The walls of the room are filled with scribbles left by the laborers.

Next to a drawing of a monk with a satgat, a traditional hat made of bamboo, there was a note in Japanese that said, “There is a [company] get-together tonight.” Apparently, Japanese workers also resided there. From that writing alone, it’s hard to tell whether the writer is excited or reluctant about the forthcoming gathering.

Baek Yeong-im, who runs “pot_R,” used to work at a civic organization and bought the house in 2011. Baek has little connection to the history of the house, except for the person she bought the house from.

The previous owner of the house was born in this Jeoksan Gaok and lived here for all of his life. Jeoksan Gaok, literally meaning an “enemy’s property or house,” is the term Koreans use when referring to houses that the Japanese left behind after their colonization of Korea (1910-1945).

The father of the previous owner used to work as a manager at the cargo company and took over the house when the head of the company went back to Japan after Japan was defeated at the end of World War II in 1945.

It turned out that it was to the benefit of Baek that the previous owner was stubborn and did not alter the house much, despite its obvious Japanese look and potential stigma attached to such houses in Korea, which is still struggling to resolve issues related to Japanese colonization.

“When I went up to the third floor, I saw the tilted walls. They had pieces of Yomiuri Shimbun [Japanese newspaper] of the 1920s and scribbles in Japanese all over them,” Baek recollected. “Light came in through the window and shone on the old tatami room. That’s when I went, ‘This place must be preserved.’?”

For months, she consulted experts in the field of modern architecture on restoring the house. Based on old documents, she had workers restore the exterior to its original form. They also cleaned up decades-old dirt off the pillars.

Baek had work done on the walls for insulation, as the traditional Japanese house came with no cooling or heating facilities. Otherwise, she attempted to leave the house as it was, as attested by the attic on the third floor, which has structures left entangled as if the work was not done yet.

She said she hopes people would feel the traces of history that remain in the space just as they are.

Remembrance of the past

“Buildings from the Japanese colonization era were considered a humiliation and thus, quickly demolished in the years after Korea’s independence,” Baek said.

“However, [whether it is a] shameful part of the history or a proud part, we should preserve and utilize buildings from the past and remember and learn from the past.”

In fact, in the past several months, it appears Koreans have begun to realize that even the disgraceful part is part of history and that tearing down buildings from the Japanese colonization era isn’t a solution to the ongoing controversial historical issues between the two countries.

Besides “pot_R,” Koreans have restored Boseong Inn in Beolgyo, Boseong County, South Jeolla, last year to be used as a cultural venue. The inn was built in 1935 and consists of a two-story wooden building with a mix of Japanese and Korean architectural features. And in June, they also restored a cluster of Japanese buildings in Gunsan, North Jeolla, into a history education and art creation zone that houses museums, galleries and cafes.

However, the restoration of “pot_R” is unique in that it was done by an individual, while most of the high-profile restorations of Japan’s architectural relics have been carried out by regional governments or civic groups. Thanks to efforts by Baek, the Cultural Heritage Administration is in the process of reviewing the historical and architectural value of the “pot_R” building.

Once the CHA gives its green light, the building will be designated as Korea’s “Registered Cultural Heritage,” which refers to structures in modern times that the Korean government considers important and needs preservation.

People that visit “pot_R” are from all walks of life. One old man came, saying that his father worked for the cargo company that used to be there. He looked around every corner with emotional eyes. Some are just office workers who came for coffee, chatting casually in the tatami room with their co-workers.

Whoever they are, in hopes that people would take interest in the old stories the buildings have to tell, Baek put up a postcard that features old photos of Incheon on the walls. “It is a rewarding experience when young people take interest in the old tale of this house,” Baek said. “I hope Koreans don’t just demolish old buildings and construct new ones, but realize that old buildings can also be a commercial success.” 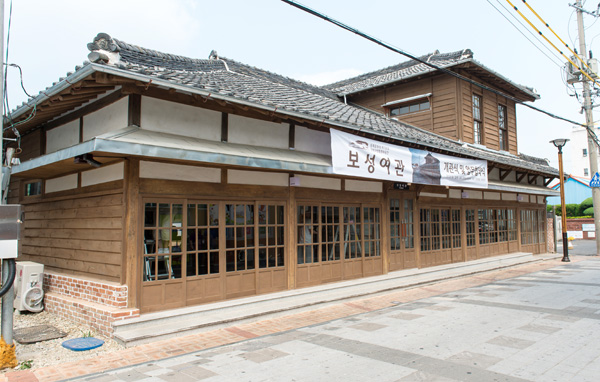 Beolgyo was a strategic area for Japan. It served as an advance base for Japanese businessmen who had come through the nearby Yeosu Port.

The Boseong Inn - built in 1935 as an upscale hotel that served those Japanese merchants - is a testament to the identity crisis Korea experienced during Japanese colonization (1910-1945). It features a mix of Japanese and Korean architectural features - Japanese roof tiles and tatami mats and a single-story, Korean-style brick house.

Thanks to the efforts of the National Trust for Cultural Heritage, the Boseong regional office and Cultural Heritage Administration, the storied inn was restored last year. Since then, it is being used in a variety of ways, including as a guesthouse, exhibition hall, cafe, seminar room as well as a performance venue.

The inn is better known as one of the settings in the novel “Taebaek Mountain Range.” Written by Jo Jung-rae in the 1980s, it’s one of the most important books in contemporary Korean literature. In the novel, the inn was called Namdo Inn.

Korea’s famous film director, Im Kwon-taek, later made the novel into a film with the same name in 1994.

“When I made the film, I visited the inn and it was on the verge of collapse so I couldn’t film it,” Im recollected during the opening ceremony of the inn in June 2012. “I sense that people are paying more attention to things that are old. It feels good.” 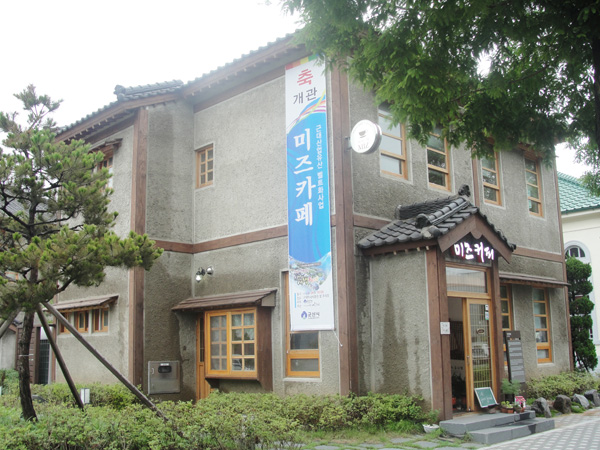 Jangmi-dong was the symbol of Japan’s extortion of Korean rice in years leading up to Japanese colonization. In fact, the name jangmi literally means “storing rice.”

After the Gunsan Port - which was small then - opened to foreign powers in May 1899, the Japanese developed Jangmi-dong in order for them to forcibly import Korean rice. That is why the area is home to a rice warehouse, a rice mill, Japanese financial institutions, Japanese trading companies and Japanese-style residences. In the novel “Arirang” by Jo Jung-rae, the process is described in detail.

In recent years, the Gunsan city government purchased these buildings and formed what it called the “Modern Culture Belt.”

It consists of Japanese banks transformed into a modern museum and modern architecture exhibition hall, a rice warehouse reborn as a theater, a Japanese-style residence refurbished into an art gallery and a Japanese trading company reborn into a book cafe. The Gunsan Modern History Museum was also built in the area.

On Aug. 1, the Gunsan city government said that the number of visitors to the museum surpassed 400,000 just 22 months after it opened. Officials estimated that 70 percent of the visitors were from outside Gunsan. 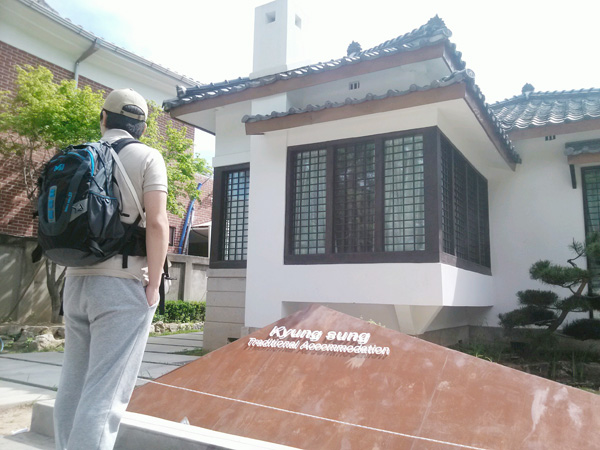 Jeonju is home to a beautiful cluster of decades- and centuries-old hanok, or traditional Korean houses. Who would’ve thought that in the heart of the hanok village is a Japanese-style residence now refurbished into a guesthouse?

Kung Sung Traditional Accommodation is a wooden, one-story Japanese-style residence built in the 1920s. It was the house of a Japanese police chief in 1927. In later years, a Korean family purchased the house.

“My husband’s family used to live there,” said Jang Seon-kyeong, who runs the guesthouse. “After they moved to an apartment, they renovated it into a guesthouse.” Kyung Sung opened in March, so it’s relatively new. But its unusual look almost always attracts passersby.

Also it is located right next to Gyeonggijeon, or Gyeonggi Palace, where visitors can find a portrait of King Taejo, the founder and the first king of the Joseon Dynasty (1392-1910), which is another reason why the young guesthouse quickly rose to stardom.

While Jang takes care of the reservations, it is her husband - who is in the interior design field - that oversaw the entire renovation process. While keeping the general framework of the house, he added a modern touch with artworks and designer furniture pieces.