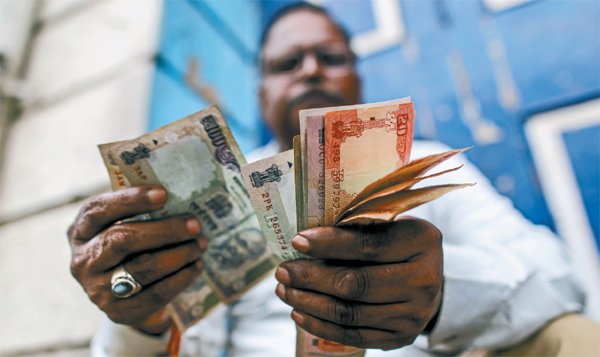 An Indian counts rupee notes near the Bombay Stock Exchange building in Mumbai on Wednesday. The prospect of an indecisive 2014 election in India is eroding confidence among global investors that the government can stop the rupee’s worst drop in more than two decades. [BLOOMBERG]


The so-called “Bernanke shock” that rattled the stock markets across the globe - including the Seoul main bourse - in May has returned, as it has become clear the U.S. Federal Reserve Board is poised to start cutting back on its bond-purchasing program.

The benchmark Kospi fell the moment it opened after minutes from the last Fed meeting showed broad support for tapering quantitative easing this year. The Kospi closed at 1,850 after losing more than 18 points, or nearly 1 percent. The local market has been falling since last Friday.

Even a surprisingly optimistic report on China’s economy that has been decelerating for two consecutive quarters failed to halt the bearish rally. China’s manufacturing index unexpectedly expanded this month from an 11-month low, sparked by rising domestic demand triggered by the government’s support for growth including tax breaks for small businesses and railway investment.

In the past five trading days, the main bourse has declined more than 4 percent. Foreign investors who were net buyers until Tuesday have been off-loading for two consecutive days.

Although in their last meeting members of the Federal Reserve Board did not set a specific date for starting to curb the stimulus program, minutes showed that policy makers were “broadly comfortable” with Chairman Ben Bernanke’s plan to start reducing bond buying if the economy improves, with a few saying tapering might be needed soon.

“Almost all participants confirmed they were broadly comfortable” with the committee moderating “the pace of its securities purchases later this year,” the minutes said.

However, the market has already shown that it expects the U.S. central bank to start taking action next month.

Fear of a massive exodus of foreign investment in emerging markets has triggered anxieties of another crisis similar to the last one in late 2008.

The Philippine Stock Exchange Index lost as much as 6.9 percent as local markets resumed trading after a three-day closure because of floods in Manila and a holiday on Wednesday.

The Jakarta Composite Index tumbled 2.3 percent, dropping about 20 percent from its May 20 peak.

Developing-nation stocks have lost about $1 trillion this year on concern that economies from India to Indonesia are weakening. The MSCI Emerging Markets Index lost 1.1 percent.

“The prospect of tapering sooner rather than later is a good excuse for markets to have a correction,” said Don Williams, chief investment officer at Platypus Asset Management in Sydney. “The market is correcting and that might continue for some time.”

“It’s a signal to investors to reduce their emerging-markets exposure,” said Laurentia Amica Darmawan, fund manager at First State Investments, which manages about 5.9 trillion rupiah ($529.4 million) in assets, in Jakarta. “The tapering could see the U.S. dollar strengthening, so what’s the point of investing in emerging-market assets?”

The rupee slumped to an all-time low and Indian stocks swung between gains and losses. It fell to an unprecedented 65.5025 against the dollar. Global funds have cut holdings of Indian debt by $10.1 billion since Bernanke mentioned paring stimulus May 22.