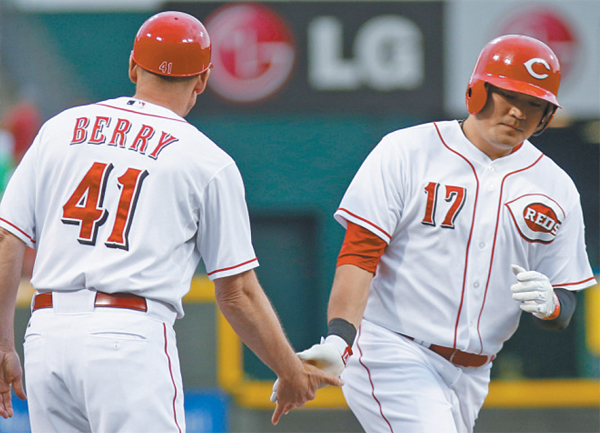 Cincinnati Reds’ Choo Shin-soo, 17, is congratulated by third-base coach Mark Berry after homering in the first inning on Wednesday, in Cincinnati. [AP/NEWSIS]

CINCINNATI - Choo Shin-soo went 4 for 5 with a homer and three RBI to spark Cincinnati’s offensive outburst in a 10-7 win over the Arizona Diamondbacks on Wednesday.

The Reds opened up a six-game lead over Arizona in the race for the National League’s second wild-card spot.

Cincinnati remained third in the NL Central, but moved to two and one-half games behind first-place Pittsburgh, which lost at San Diego.

Mike Leake allowed four runs in the fifth inning, but was dominant in his other five innings for his first win in his past five starts.

Leake (11-5) allowed six hits and four runs with no walks and three strikeouts while the Reds were building an 8-0 lead.

The Diamondbacks added three runs against the Cincinnati bullpen before Aroldis Chapman finished for his 32nd save and first career two-inning save.

Todd Frazier and Brandon Phillips added RBI singles in the eighth, giving the Reds their highest run total since winning, 11-0, at San Francisco on July 22.

Choo hit Brandon McCarthy’s second pitch of the game 337 feet down the left field line, where the ball appeared to hit the lens of a TV camera just inside the foul pole.

The Reds had four straight two-out hits to open up a 4-0 lead in the second. Leake lofted a ground-rule double down the right field line that bounced into the netting above the visitor’s bullpen to drive in one run, and Choo drove in two more with a single to center.

Chris Heisey added an RBI double and Devin Mesoraco made it 7-0 with a two-run single up the middle through a drawn-in Arizona infield to knock McCarthy (2-8) out of the game after a season-low two and one-third innings.

He allowed eight hits and a season-high seven runs with one walk and two strikeouts while slipping to 0-5 in his past seven starts.

Choo narrowly missed hitting his second home run of the game leading off the fourth inning, settling for a double off the top of the left field wall and scoring on Joey Votto’s single.

The Diamondbacks broke through against Leake with four runs in the fifth. Pinch-hitter Jason Kubel delivered a two-run single and Adam Eaton hit Leake’s next pitch for his second homer of the season, a 367-foot drive into the visitors’ bullpen.

Prado added a run-scoring single off J.J. Hoover in the seventh and Gerardo Parro led off the eighth with his ninth homer, a fly ball off Jonathan Broxton that hit the top of the left field wall and bounced back onto the field before the umpires ruled it a homer after a 3:02 replay delay. AP