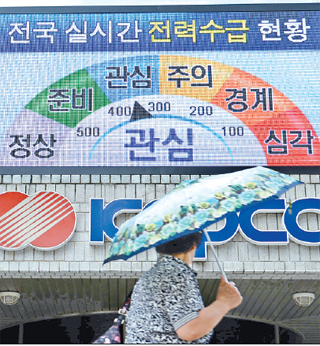 A woman passes by Kepco headquarters in southern Seoul yesterday as the country saw its fourth level 2 warning this year. [NEWSIS]

The country spent an extra 5.7 trillion won ($5 billion) over the past three years because a handful of nuclear and thermal power plants were out of operation for more than 1,500 days, according to a lawmaker’s analysis.

Lawmaker Jhun Ha-jin, member of the Trade, Industry and Energy Committee of the ruling Saenuri Party, said in his report that Korea Electric Power Corporation, the state-run power distributor, spent the money to purchase power to offset shortages triggered by shutdowns of several nuclear and thermal power plants that were offline for a total of 1,509 days.

Power shortages this summer became much more of a worry after the government in late May shut down three nuclear plants after it was discovered they were contained faulty components with fabricated test certificates.

The lawmaker pointed out the additional cost surged largely due to bribery scandals in the nuclear industry.

“Due to the shutdowns of the nuclear power plants, we had to pay an astronomical price,” Jhun said. “The cost spiked especially for the past two years.

“There is a high possibility that the power-crunch crisis could break out again this winter.”

As of yesterday, six of 23 nuclear power plants are not operating.

Due to the shutdown of the Hanbit-6 nuclear reactor Wednesday because of a cooling pump problem, the country’s power supply ran short yesterday, increasing alarm that the crisis of the long, hot summer might not be over yet.

It will take several days to determine the precise cause of the Hanbit-6 problem and resume operations, according to Korea Hydro and Nuclear Power.

It was the fourth level 2 warning this year.

Since the Hanbit-1 reactor is scheduled for regular maintenance starting Monday, the threat of power shortages is expected to persist at least through the end of the month.

The Ministry of Trade, Industry and Energy, meanwhile, was in a celebratory mood, touting the government’s aggressive efforts to overcome power shortages that could have led to a blackout last week. But with the expected shutdown of additional power plants, it decided to tighten up the slack.