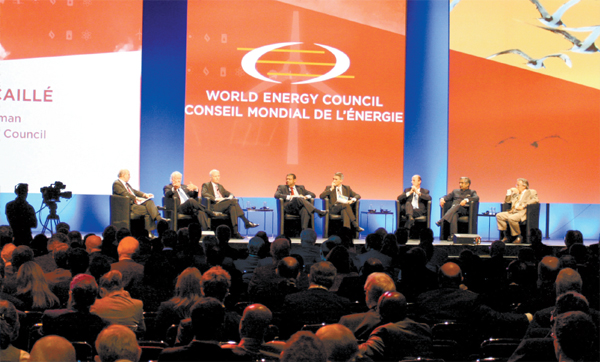 Discussions at the 2010 World Energy Congress, held in Montreal, Canada.

Securing stable energy sources for the future is at the top of the agenda for leading politicians and businesspeople today. Fossil fuel supply is finite, accounting for 80 percent of the world’s energy, while worldwide energy consumption is projected to increase 40 percent by 2035.

Against this backdrop, the 22nd World Energy Congress under the theme “Securing Tomorrow’s Energy Today” will be held in Daegu from Oct. 13-17. The Congress is hosted by the World Energy Council and WEC Korean Member Committee, and organized by the WEC Daegu 2013 Organizing Committee. Around 5,000 delegates from 100 countries will participate in the Congress, and 25,000 participants will fill 22,000 square meters (5.4 acres) of the exhibition space.

The first World Energy Congress, then known as the World Power Conference, dates back to 1924. The founder, Daniel Dunlop, a pioneer in the British electricity sector, wanted to set up a global platform for energy experts and exhibitors to share information and opinions on the energy sector’s trends and challenges. The Congress has successfully evolved into a prominent triennial gathering of energy ministers, industry CEOs, analysts and researchers since then.

Some 90 years later, the scheduling of the 22nd Congress is well timed. The world is transitioning from using fossil fuels such as oil, gas and coal to nuclear power and renewable energy such as wind, solar and bio-fuels. The pressing challenge is to overcome the “energy trilemma,” according to Pierre Gadonneix, chairman of the World Energy Council.

The participants have three questions to pore over: Will there be enough energy to meet growing demand among both rich and poor nations? How can energy supplies be protected against disruptions? And how will efforts to mitigate climate change affect access to future energy sources?

Public alertness is also stronger than before as the Fukushima accident raised the issue of nuclear safety, and concerns about the environmental impact of fossil fuels are mounting. At such a critical time, the 22nd World Energy Congress will be an excellent opportunity for the related parties to renew leadership, exchange insights and explore business opportunities.

The 22nd World Energy Congress has some distinguishing features. As of writing, it features 221 renowned speakers from 56 countries. Speakers include influential energy ministers, CEOs of energy companies, and representatives of international organizations and civil society. It consists of 63 sessions with various opinion leaders and covers four large topics including nuclear energy, renewable energy, resurgence of natural gas and the future of oil.

The main sessions will be complemented by the Future Energy Leaders Program, where the next generation of energy leaders contribute their insights, and the Developing Countries Program, where participants from developing countries study Korea’s economic growth model in relation to energy. The Congress covers diverse energy-related issues, from the environment to the global economy. Moreover, it is notable that the event will be held for the second time in East Asia - the most dynamic energy market.

With only 51 days left until its opening, the 22nd World Energy Congress has been receiving worldwide attention. On June 28, President Xi Jinping of China and President Park Geun-hye of Korea, pledged to cooperate with the Congress in their joint communique following a summit in Beijing. With the world watching closely, the Congress is an opportunity for the Korean government to display international leadership in the global energy sector.

The founding mission of the World Energy Congress was “to promote the sustainable supply and use of energy for the greatest benefit of all people.” The world will be eagerly watching the bright minds involved get one step closer to achieving this mission through the five days of Congress.