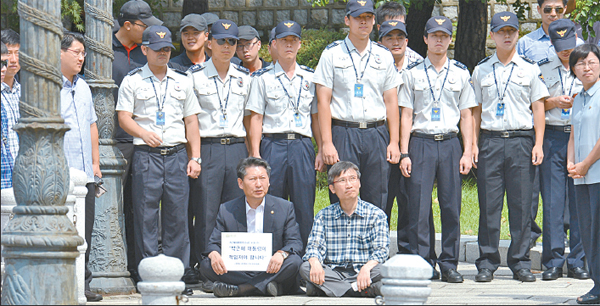 Representative Jung Chung-rae of the Democratic Party and Representative Lee Sang-kyu of the Unified Progressive Party protest at the Blue House yesterday while delivering their letter to President Park Geun-hye. [NEWSIS]

A group of opposition lawmakers wrote a letter to President Park Geun-hye comparing her election last year to a rigged presidential election in 1960, infuriating the ruling Saenuri Party.

The Blue House hasn’t commented on the record, although it accepted it yesterday afternoon.

A National Assembly investigation into allegations that the National Intelligence Service interfered in last year’s election to support Park is coming to an end with no tangible result, which the opposition blames on the ruling party. On Wednesday, seven lawmakers from the Democratic Party, and one lawmaker from the Unified Progressive Party, wrote a letter to Park demanding she take responsibility for the NIS’s alleged interference in the election.

“In 2007, Park paid a visit to the March 15 Democracy Cemetery, which commemorates the spirit of the protests in Masan against the March 15 [1960] election rigging,” the letter said. “Since she knows what a corrupt election means, she must learn a lesson from it.”

Syngman Rhee, South Korea’s first president, won his fourth term in an election on March 15, 1960, in a heavily rigged vote. A massive protest broke out in Masan, South Gyeongsang. After the police opened fire on demonstrators, the protest spread nationwide, triggering the student-led April 19 revolution. On April 26, 1960, Rhee was forced to resign and two days later he was flown by the U.S. CIA into exile in Hawaii.

“The National Assembly probe has proven the public’s suspicions that the National Intelligence Service illegally intervened in the presidential election and the police later covered it up,” the lawmakers’ letter said. “Park must make clear her position as to how she will take responsibility for this situation.”

“The Democratic Party has now shown that it doesn’t accept the outcome of last year’s presidential election,” Representative Kim Tae-heum, spokesman of the Saenuri Party, said yesterday. “Comparing the last presidential election to the rigged election on March 15, 1960 is an action that insults the people.”

Kim said the DP leadership must say whether it agrees with the lawmakers who wrote the letter.

“We want DP Chairman Kim Han-gill to make public his position and to issue an apology to the public,” Kim said.

The Democratic Party yesterday convened a meeting of its lawmakers to decide its course of action. Since Aug. 1, the Democrats have been demonstrating against the ruling party’s hijacking of the Assembly investigation into last year’s election.