Relatives step in to pay off Roh’s remaining fines

Relatives step in to pay off Roh’s remaining fines 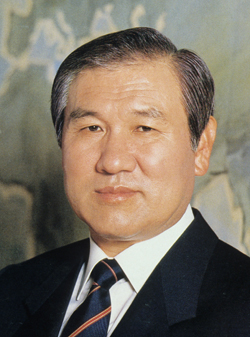 Former President Roh Tae-woo will soon have the remainder of his multibillion won corruption fine paid off by his younger brother and a former in-law.

“His brother Jae-woo and his former in-law, Shin Myung-soo, ex-chairman of the Shingdongbang Group, told us they will pay the 23 billion won [$20 million] of the remaining fines together” on the former strongman’s behalf, an official with the prosecution told the JoongAng Ilbo. Shin Myoung-soo is the father of Roh’s former daughter-in-law.

So far, Roh has paid about 91 percent of his 262.8 billion won in fines levied in a 1997 Supreme Court trial, when he was convicted of bribery.

Roh has asked the government to collect the remaining 9 percent, or 23 billion won, from Shin and his younger brother, saying he had given them about that amount in slush funds in the past.

A close aide to Roh told the JoongAng llbo, “Although we heard that there were some negotiations between Jae-woo and Shin over the matter, we don’t know the details.”

According to the Ministry of Justice, in 1988 and 1991 (during his term as president), Roh gave a total of 12 billion won to his brother. Roh Jae-woo then spent the money on founding a cold storage warehouse company called Aurora CS.

In 1990, the former president also gave about 23 billion won to Shin, who used the money to purchase real estate.

In 2001, the Supreme Court upheld a lower court ruling demanding the two return all the money to the government.

So far, Roh Jae-woo has paid about 5.2 billion won, and Shin has only coughed up 500 million won.

But they have been facing growing public pressure to pay up since the government put a new law in place in August focused on going after public officials’ unpaid fines and used it to aggressively pursue ex-president Chun Doo Hwan.

Chun, who has 167.2 billion won in outstanding corruption fines, has been the subject of an intensive prosecutor probe into his hidden wealth that has involved property seizures and arrests of relatives.

Shin said he had no legal duty to pay the fines for Roh, because the statute of limitations has expired on his case, sources told the JoongAng Ilbo. But he said he will pay the government 8 billion won for the former president, “out of ethical responsibility.” Roh Jae-woo will pay the remainder.

Shin said he want to pay the money not as fines, but as a “donation.” The prosecution insisted that it was a fine, and Shin ended up relenting.