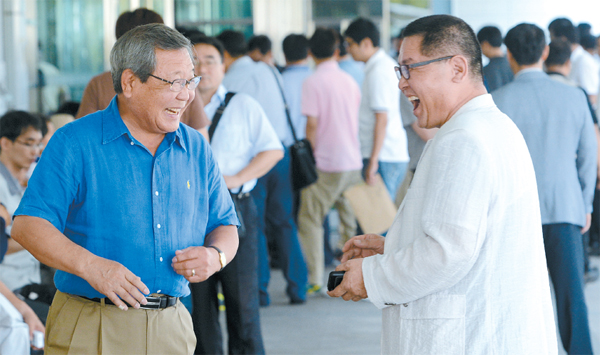 South Korean businessmen who run factories in the Kaesong Industrial Complex joke with each other yesterday in the Inter-Korean Transit Office in Paju, Gyeonggi, as they prepare to visit the joint inter-Korean economic project. [NEWS1]

South and North Korea will hold talks about reunions of separated families at the border village of Panmunjom today, while North Korea responded to South Korea’s proposal for another set of talks about resuming tours to Mount Kumgang.

Relations have gotten warmer since the agreement to reopen the jointly-run Kaesong Industrial Complex.

Yesterday, Pyongyang accepted the proposal from Seoul to hold Red Cross talks today at Peace House in the Southern part of the truce village of Panmunjom, to discuss resumption of reunions of families divided during the 1950-53 Korean War.

The two sides exchanged lists of their three negotiators. South Korea’s chief negotiator will be Lee Duck-haeng, an official from the Korean Red Cross based in Seoul, and his Northern counterpart will be Pak Yong-il, a member of North Korean Red Cross Central Committee who attended a round of Red Cross talks in 2010.

For the talks to resume tours to Mount Kumgang, the North made a counterproposal to hold them in late August or early September, shooting down Seoul’s Sept. 25 proposal, which would be after the Chuseok holidays.

Vehicles wait at customs, immigration and quarantine checkpoints near the inter-Korean border yesterday as factory owners traveled to the Kaesong Industrial Complex

As of press time, Seoul hadn’t responded to the timing proposed by the North.

Reunions of the war-torn families have been halted since November 2010 because of frosty inter-Korean relations.

So far, a total of 18,000 North and South Koreans have participated in government-arranged face-to-face reunions, while 3,700 people have interacted with relatives via video.

Two days after South Korean President Park Geun-hye formally proposed reunions in her Aug. 15 Liberation Day speech, Pyongyang accepted the offer and proposed to hold them in Mount Kumgang before or after the mid-September Chuseok holidays.

Pyongyang also suggested having video reunions in early October to commemorate the Oct. 4, 2007 joint declaration from the inter-Korean summit in Pyongyang. Details about the reunions will be discussed at the Red Cross talks today, an official from the Unification Ministry told reporters yesterday, including the venue and dates.

“We think it would be technically difficult to hold the reunions before the Chuseok holidays,” the official said. “We have not decided anything about the video conferences yet.”

Given past experience, the official said it would take at least one month to prepare for reunions of 200 families.

So far, except for meetings in 2000 and 2001, all reunions were held in Mount Kumgang, where the infrastructure was built and is maintained by Hyundai Asan.

North Korea has been reluctant to send its citizens to reunions in the capitalist city of Seoul. When asked if the reunions will take place in Mount Kumgang, the ministry official said nothing was decided.

The resort has been shut since July 2008 when a South Korean tourist was fatally shot by a North Korean soldier. North Korea upset the South by refusing to formally apology, explain the incident, or give any guarantee that it wouldn’t happen again in the future.

While Pyongyang is apparently eager to reopen the Kumgang resort, concerns are growing in South Korea that the resumption of tours to the resort - a popular attraction for South Koreans - could violate UN Security Council (UNSC) resolutions No. 2087 and No. 2094.

The resolutions, adopted unanimously by the 15-member UNSC in January and March respectively, were responses to North Korea’s successful launch of a long-range missile in December 2012 and its third nuclear weapons test in February.

They both prohibit Pyongyang from “transfers of bulk cash,” which “could contribute to the DPRK’s [North Korea’s] nuclear or ballistic missile programs.” The South Korean government formally supported the UNSC resolutions.

Hyundai Asan paid about $480 million to the North for the exclusive right to run the tourism business for 50 years starting in 1998. Hyundai also paid entrance fees to the Northern regime for each South Korean tourist, from $30 up to $80 based on the length of the trips.

A total of 1,934,662 South Korean tourists have visited Mount Kumgang, according to the Unification Ministry.

“Mount Kumgang tourism is sort of a financial support [for North Korea],” Jeung Young-tae, a senior researcher at the Korea Institute for National Unification under the Unification Ministry. “Although it is not officially confirmed, such tourism has characteristics of transfers of bulk cash.”

A high-ranking Blue House official told the Munhwa Ilbo Tuesday that the reason why Seoul is hesitant to restart tours to Mount Kumgang is because of the sanctions.

“Resuming the tours immediately is problematic because it’s a violation of UNSC sanctions that ban the entry of U.S. dollars into North Korea,” the official said.

However, Cho Tai-young, a Ministry of Foreign Affairs spokesman, said whether or not Mount Kumgang tours violate the sanctions will ultimately depend on a decision by the UNSC itself.