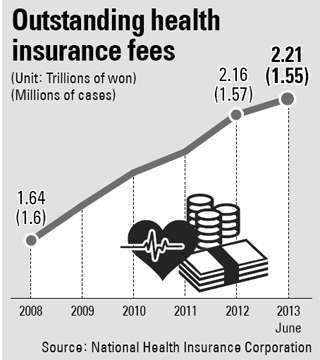 Kwon, a resident of Gangnam District, has assets of about 1.05 billion won ($940,000), but didn’t pay his national health insurance fees between 2010 and April of this year, meaning he owes a total of 20.7 million won.

A Gyeonggi resident surnamed Han is doing even better than Kwon, with a fortune of some 12.2 billion won. He owes 53.2 million won in health insurance fees from the last two years. His fees are so high because he makes so much - the more you make, the more you pay.

Now, their names have been made public along with other wealthy people who have intentionally avoided paying for their national health insurance.

According to the office of Saenuri lawmaker Shin Yee-jin, a member of the Health and Welfare Committee of the National Assembly, about 1.55 million households hadn’t paid health insurance fees for more than six months as of July. The total amount owing is about 2.2 trillion won. About 62,000 of those people had traveled abroad at least once between January and April.

When you work for a company, health insurance fees are usually deducted from your paycheck automatically. But people who run their own businesses or are not affiliated with a company for whatever reason, like the people on Shin’s list, have to pay their own fees to the National Health Insurance Corporation (NHIC).

Sometimes there’s a reasonable excuse, and not everyone who goes overseas is necessarily rich. Some are merchants selling cheap Korean goods like leather bags and clothing in other Asian countries such as China.

Still, there are many rich people who have intentionally not been paying their fees.

The health insurance agency said they categorize an average of around 50,000 people as delinquents every year. People who have owed more than a million won for more than six months are targets. They then look through those names for people with expensive possessions such as a Mercedes Benz or other luxury vehicles.

A total of 53,904 households were caught by the health corporation for not paying 121.8 billion won in national insurance fees last year. Of that, the NHIC has collected about 80.9 billion won, or 65.9 percent.

This year, a total of 54,902 households have been categorized as delinquents, and are in arrears about 114.2 billion won. One person who hasn’t paid up is a popular TV celebrity surnamed Park who owns two imported luxury sedans and has traveled overseas four times this year. He owes 3.11 million won.

“The government needs to strengthen penalties on health fee delinquents,” Shin told the JoongAng Ilbo. “Their savings and assets must be confiscated and their credit card use overseas must be limited.”