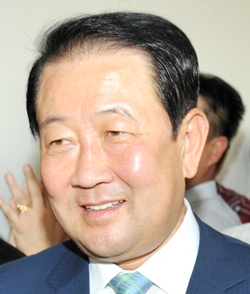 The Gwangju High Court yesterday convicted Park of violating the law by campaigning at a high school reunion before the official campaign period for the general election of April 2012.

Under the law, if a representative is fined more than 1 million won, he or she must quit the National Assembly.

The court did not find Park guilty of offering money to voters to win the candidacy from Dong District in Gwangju in the Democratic Party’s primary before the general election.

“There is no evidence to back up the charge that Park colluded in a scheme to win the primary,” said the court.

Park was indicted in May 2012 for allegedly offering money to voters in the primary. On June 26, 2012, the 64-year-old lawmaker was sentenced to a two-year prison term by the Gwangju District Court.

Park was put behind bars after the National Assembly passed a motion to strip him of immunity from arrest as an Assembly member. Park left the Democratic Party following that vote.

An appeals court last September released him from prison and levied an 800,000 won fine. The Supreme Court sent the case back to the Gwangju High Court, which ruled yesterday.

Park is nicknamed “Phoenix” because of his constant ability to bounce back from legal charges.

Since 1999, the lawmaker has been arrested four times on various charges including bribery and election law violations. Though he has been jailed in the past, he’s always been acquitted or had the charges reduced.

“I have been arrested four times, but have eventually been found not guilty of the charges,” Park said after the ruling. “I hope no one else will be victimized by the judiciary like me.”