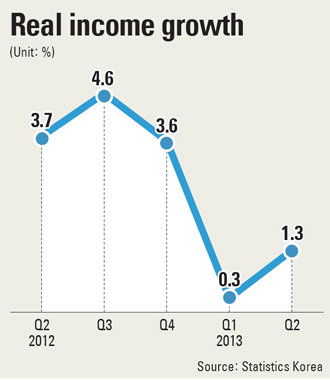 According to Statistics Korea, the average monthly income of households rose 2.5 percent to 4.04 million won ($3,627) in the second quarter from a year earlier.

The monthly average disposable income stood at 3.28 million won, up 2.1 percent from the first quarter.

However, real consumption expenditures of households fell 0.4 percent to 2.4 million won on average during the same period, indicating that consumers aren’t feeling flush enough to open their wallets.

Total consumption declined despite a 9.1 percent increase in spending on home appliances for the summer, including air-conditioners and dehumidifiers, and a whopping 20 percent jump in leisure spending thanks to a camping boom this summer.

Income growth was seen in all five income brackets but especially in middle-class households.

Despite a 3.3 percent increase in incomes, households in the fourth-highest income bracket cut back on spending in the second quarter as they didn’t make big purchases like automobiles, the report said.

Growth in household surpluses was the highest since the second quarter of 2003.

The Ministry of Strategy and Finance said both nominal and real incomes showed growth owing to gradual improvements in employment.

Growth in consumer prices remained in the 1 percent range for the past seven months.

But the ministry considered the growth rates still insufficient to encourage people to spend more.

“There are a few signs that falling real expenditures are starting to rebound,” said an official at Statistics Korea. “We could expect better results in the next quarter.”