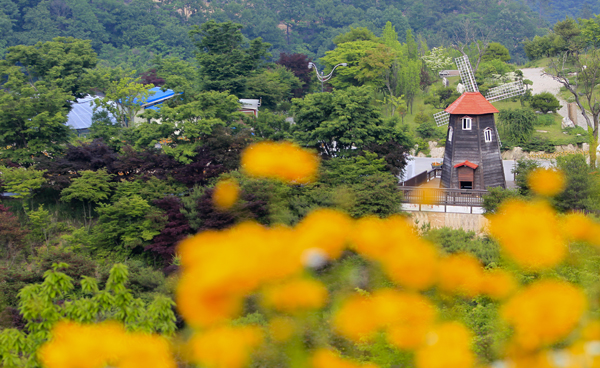 The red-roofed windmill at E-An Land is the signature landmark of the popular countryside getaway. Provided by Cho Young-hee

When a man surnamed Lee and another named An decided to create a 23.1 hectare (57.1 acre) garden in 1999, in Gongju, South Chungcheong, they did not have to work too hard to find the right name. They just put their surnames together and called the park “E-An Land” (“E” being how “Lee” is actually pronounced in Korean).

Today, E-An Land is one of the more popular and larger getaways in Chungcheong. Scarlet waves of poppies create great backdrops for photographs, while parakeets approach visitors without fear, and goats come up to visitors and ask to be fed.

These days, Lee and An focus on cultivating the gardens sprawling parks around the main theme park and the fortress, having handed over the management of the “theme park” part of E-An Land to professionals two years ago.

But the new managers of the park have continued to add programs and grow their facilities, turning E-An Land into a year-round attraction.

E-An Land is known for its natural beauty. It offers great views of various flowers in every season. During the spring, tulips and poppies color the grounds, while in summer globe amaranths and crape myrtles turn E-An Land red and pink. During the autumn, marigolds and cosmos dance in the cool breeze.

But the park offers more than just natural scenery. It also has six areas for children, providing fun and education to kids and students.

As E-An Land offers tents and pensions, visitors can also stay overnight in the park, surrounded by trees, flowers, plants and animals. At the Indian Village, visitors can enjoy any of the 25 Indian teepees without having to bring heavy camping gear from home. Various sizes are available to accommodate from one to five people. 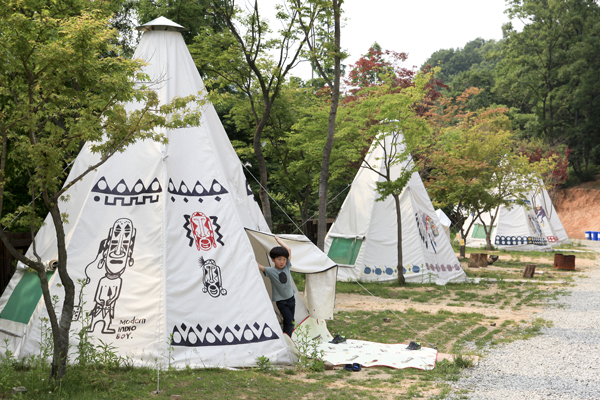 During the winter, the village provides electric blankets for free so that camping can still be enjoyed despite the cold weather. Visitors staying at the Indian Village can also hire barbecue grills and host outdoor cookouts. Each tent costs 30,000 won ($27) per night.

Past the ticket office at the entrance to the park are the six children’s areas, starting with the Children’s Zoo. All six areas are included in the basic park admission.

At the zoo, small and friendly animals such as rabbits, geese, hedgehogs and turkeys are on display. The animals are all beyond low fences, so children can see them easily without a parent picking them up.

Children can touch the animals and even feed some, such as parakeets and goats. This zone has been a favorite for children since the opening of E-An Land, according to Yoon Soo-hyung, 52, director of the park.

After the children’s zoo, visitors will come to the Herb Village. The strong aromas of the herbs are a great way to release stress. There are also restaurants and snack bars in this area, giving visitors a chance to eat while they enjoy fine herbal teas. At the Herb Flower Garden, children can try planting herbs and then take the potted plant home.

This is an area full of parakeets that approach visitors to be fed. Bird feed can be purchased nearby. This experience, according to Yoon, is popular with children and adults.

In the next area, Taegeukgwan, there are dozens of taegeukgi, or Korean flags, hanging around the botanical garden. However, a few of the taegeukgi are incorrect. If you spot the mistakes, you can get a taegeukgi handprint for free.

Another favorite zone is Dinosaur Land, which will bring back memories of “Jurassic Park.” In this zone, models of 15 kinds of dinosaurs from the Cretaceous and Jurassic periods are on display while the sounds of their cries resonate from speakers.

As the dinosaurs’ heads and tails move side to side, children can enjoy a most realistic dinosaur experience. Maybe too realistic - the park recommends being careful with younger children who might find the dinosaurs too scary. 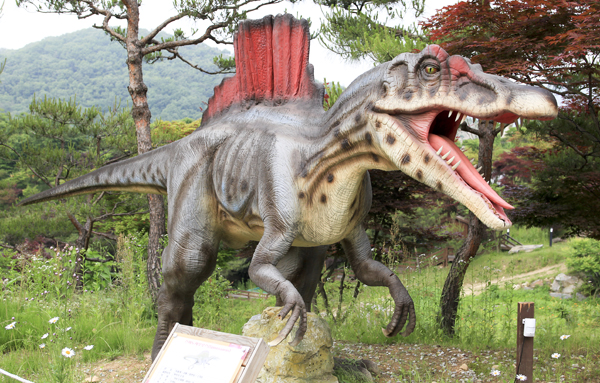 Toward the end of the experience zones there are a few good spots to relax, such as Eve’s Hill and Haneul Maru Park. This is where E-An Land’s signature red-roofed windmill is located.

E-An Land hosts various festivals and events throughout the year.

It holds a tulip festival in April, followed by a poppy festival in May. From June to the end of the summer season, the park has outdoor swimming pools, allowing visitors to cool down from the summer heat. After walking through the various experience zones in the scorching summer heat, a cool swim in the pool is especially recommended.

During July and August, E-An Land also holds events at night, such as fireworks, lantern festivals and light shows.

From September to November, visitors can enjoy autumn foliage as well as festivals of marigolds and cosmos. Taking a stroll through the fields of cosmos with friends and loved ones can be especially charming, according to E-An Land. 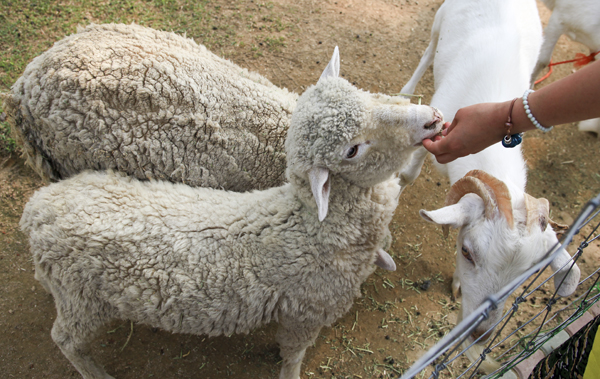 In September, visitors can also pick some of Gongju’s famous shelled chestnuts on the grounds.

From December to February, the park offers free snow sled rides. And if racing down the snowy slopes isn’t enough for you, the park even offers an ice sled run in January and February, using Korean traditional sleds.

“A professional management team has been managing E-An Land since two years ago, and we’ve been making various changes to attract visitors even during the off-season,” said Yoon. “During the summer holiday season we’ve extended our opening hours. And we are planning to add more activities and programs for visitors to enjoy during the winter holidays, too, when attendance tends to drop.”

Those who stay for several days at the E-An Land pensions can receive discounts for entrance tickets. The six activity areas open from 9 a.m. every day. They close at 5 p.m. during winter, at 6 p.m. during spring and autumn, and at 7 p.m. during summer.