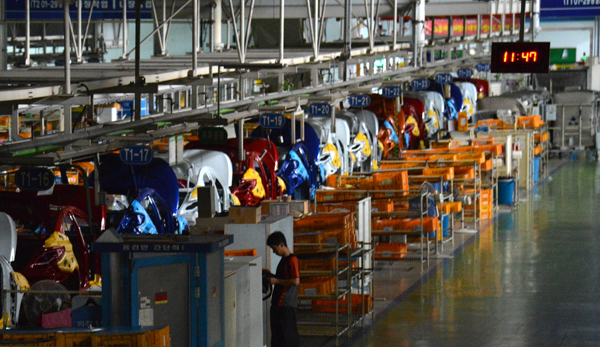 A production line at Hyundai Motor’s plant in Ulsan is idle as a eight-hour partial strike by the automaker’s union continued yesterday. [NEWSIS]

The decision this week by Hyundai Dymos, a parts manufacturing affiliate of leading automaker Hyundai Motor, to invest $35 million to build a production plant in the United States, is raising eyebrows in Korea.

The business community speculates the move might be the first step by the auto giant to increase its production at overseas plants to counter labor union strikes that occur in Korea nearly every year.

According to Hyundai Motor Group, the parts supplier will make car seats at the facility, which will be located near a Kia Motors production plant in West Point, Georgia. 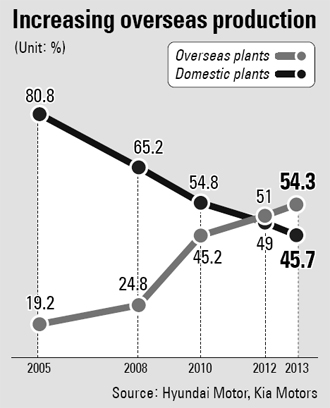 The meeting and plans for the new plant were interpreted in the market as a warning by the group’s chairman to the labor union.

Some even believe the automaker could speed up construction of a third plant in the United States.

Currently, Hyundai Motor Group has a Hyundai Motor production plant in Alabama in addition to the Kia Motor plant in Georgia. Each plant has a capacity of 350,000 vehicles a year.

As demand for Korean cars has gone up sharply since 2008 in North America, Hyundai Motor Group has struggled to keep up with orders.

Korean automakers sold a combined 1.26 million vehicles last year in the United States alone. In order to do this about 500,000 units were shipped from Korea.

If Hyundai Group builds another plant in the United States, the workload at plants in Ulsan will likely fall.

Many in the business community say the union brought the issue on itself. Earlier this year, union members refused to work weekends for nearly three months in a dispute over the number of shifts and compensation.

As a result, management was forced to increase production at its overseas plants.

In addition to job actions, the inefficiency of its manufacturing plant here also has driven the automaker to raise overseas production.

In addition, demand has been rising overseas at the same time it has been falling in Korea.

Production at overseas plants of both Hyundai Motor and Kia Motors exceeded 50 percent of total production for the first time last year and was 54.3 percent in the first half of 2013.

Hyundai Motor Group said the decision to establish a parts production plant in Georgia is not related to the current strike.

However, it did not deny the possibility that it would continue to increase production at plants outside of Korea.

“Customers will not wait if production delays continue,” said Han Sung-ho, a Hyundai Motor Group executive, on a radio show yesterday. “To preserve customer trust, we have no choice other than to increase our overseas production.”

The automaker said that as a result it was not able to produce 8,300 vehicles and claimed losses of 170 billion won ($153 million).

The company said partial strikes on Tuesday and Wednesday cost 85 billion won. The union has decided to hold another eight-hour strike Monday.