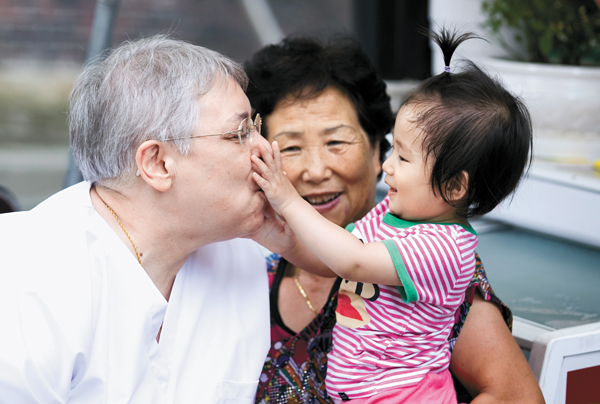 Dr. Marie-Helene Brasseur (left), a Belgian whose Korean name is Bae Hyun-jeong, has offered volunteer medical services for 38 years to some 390,000 patients from underprivileged backgrounds. By Kwon Hyuk-jae

Laughter bursts out of an apartment in Siheung-dong, Geumcheon: Dr. Bae is making one of her house calls on an elderly couple, the Yoos. “Do you like your new place? The last one was a semi-basement kingdom of mold, wasn’t it? This will be the first monsoon season you won’t have to put up with mold,” said Bae, launching the old couple into laughter that they seem to have lacked for a long time. She sits there, extracting blood samples from the pair, making small talk in fluent Korean. Next to her lies a 3 centimeter-thick (1.18 inch) chart on the Yoos with well-thumbed corners - a record she has kept since July 1994. The dossiers are part of her medical treatment management services. The blue-eyed woman is Marie-Helene Brasseur, 67; Bae Hyun-jeong is her Korean name.

“The elders around here think of me as the oldest village daughter,” Bae said. While I make my house calls, I’m bound to give other consultations too.”

One house call usually takes her about 30 minutes. Before her departure, Dr. Bae gives a warning tinged with affection, “You have to exercise a lot. Otherwise you’re going to end up in a sanitarium where you two will have to live separately, and that’s no good.”

Bae was the first person to win the Seongchun Award for Excellence in Volunteer Medical Services. Established by JW Group this year, the award is named after the pseudonym of the founder of the JW Group, Lee Gi-seok. The prize money is 100 million won ($91,000). The award is a formal acknowledgement of her 38 years of voluntary medical service to the residents of the Siheung-dong area.

When Bae moved into the neighborhood in 1975, it was a shantytown. After so many years, she is now considered a native of Siheung; there is not a single person there who does not know her. The clinic that sits tucked into a little alley is more of a house-turned-clinic than a hospital. The interior has a homely atmosphere. The basement is reserved as a community center for children; the second and third floors are a consulting office and a hospice ward for terminal patients.

Its physical capacity may be very limited, but the quantity of service being offered by Bae’s clinic is not. Fifty doctors from Seoul National University Hospital and Seoul St. Mary’s Hospital come to volunteer every month. Bae is responsible for the first round of consultations, and specialists in urology and orthopedics take the second round.

Every Thursday, Bae pays visits to fifty senior citizens who have trouble making their way to a hospital. Three times a week, she also holds night hours for patients who work during the daytime. Her working hours often extend beyond 10 or 11 p.m. She makes her house calls free of charge, and offers treatments at low cost for low-income families.

At Bae’s clinic, patients have to register their families at the government’s social services office before seeking a consultation. Then their family history is recorded to be used for consultations relating to family relationships and economic welfare. In short, non-medical services are also a key aspect of this clinic.

“Semi-basement rooms can harm your health, and there are many low-income families who struggle to overcome illnesses. So the clinic also offers job-related advice as well as legal consultations,” she said.

Bae was born in a coal mining town in the French-speaking part of southern Belgium in 1946, just after World War II. While attending middle school, she decided to devote her life to charity. “At first I wanted to become a nun, but then I turned to volunteer work. I had a boyfriend, and my parents wanted us to get married. But I basically rejected all that,” she said with a chuckle.

At university, Bae took a nursing course, a degree that is usable in all parts of the world. In 1972, through the Association Fraternelle Internationale, she first set foot in Korea. At the time she was just 26 and didn’t speak Korean. “I never imagined coming to a country I knew so little about, apart from the fact that it went through a war. Initially, I was going to go to Latin America or Africa. But I got a request from the Korean members of the Association [to come to Korea] and so I took it up, thinking that this was my calling.”

The man responsible for drawing her to Siheung-dong in the first place was Cardinal Kim Su-hwan. “I was debating with myself whether I should move to Sorok Island, but Kim told me that in Siheung-dong, ‘there are a lot of people from the countryside who settled here in shacks. It’d be nice for you to set up there and help out the community.’?” At Kim’s urging, a trio that included Yoo Song-ja, a social worker; Choi So-hee, a pharmacist; and Bae herself set up the current Jeonjinsang Clinic in 1974. Colleagues of a lifetime together, they are an institution of medical and social service.

After a year’s preparation, they purchased a 122-square-meter (1,333-square-foot) facility. “Everything was lacking,” Bae recalled. “We were three unmarried women trying to do volunteer work in a shantytown.” Since then, the area has become less a slum but still is a lower-income area. The trio first lived in a rat-infested shack, purchasing rice on credit while offering services to the neighborhood. Cardinal Kim visited them frequently to give them words of encouragement.

“We called him granddad,” Bae recalled. “He said if we had been nuns we would have been on the receiving end of those social services, and he praised us for working so hard. When he passed away, it would have been nice to have had him at our hospice.” Cardinal Kim died in February 2009.

One day in 1981, six years into her service, Bae realized that she needed full-time doctors because of the increasing number of patients. “Somebody recommended that I attend medical school. I didn’t think I could. My two colleagues had to take qualifying exams, but because I am a foreigner I could transfer into the school in addition to the fixed quota for admission. I thought I’d only do volunteer work in this country, but all the sudden I was able to study too.”

That marked the beginning of a period in which she attended school and worked at the clinic at the same time. She started attending medical school at ChungAng University in 1982. At the time, she was the oldest student enrolled there.

“Korean was hard enough, but my English was no good either because I grew up in France. So it was challenging. And reading textbooks that were riddled with Chinese characters was like trying to solve an enigma. The university told me that they could accept me, but graduating was my problem.”

While studying, she never took her hands off her volunteer work. In the evenings, she would give vaccinations at the clinic, and during the day she attended classes and studied.

After graduating, she went to the family department at Catholic University’s Seoul St. Mary’s Hospital for her postgraduate training and even received proposals for her to take up a professorship there. Adopting a resident doctor structure, her clinic began to take shape and a support association was also set up. With an increasing number of terminal cancer patients, in 1988 the clinic also started a hospice. The clinic also enlisted the services of Dr. Jung Mi-kyeong, Bae’s peer at Catholic University, as well as those of other volunteers.

Much else may have changed since then, but Bae’s daily routine remains almost the same. She still conducts her house calls and looks after patients far into the night. She prays after work and watches Korean soap operas with her colleagues. Her only luxury is her favorite exercise routine, swimming.

“For patients suffering from heart disease or diabetes, the home environment is the key aspect of treatment. So we talk to our patients a lot, to get to know them. But the reality is that many patients don’t even get to see their doctor once a year. Other doctors have tried to go on house calls and make family records, but most of them quit because of limited resources. It’s a pity.”