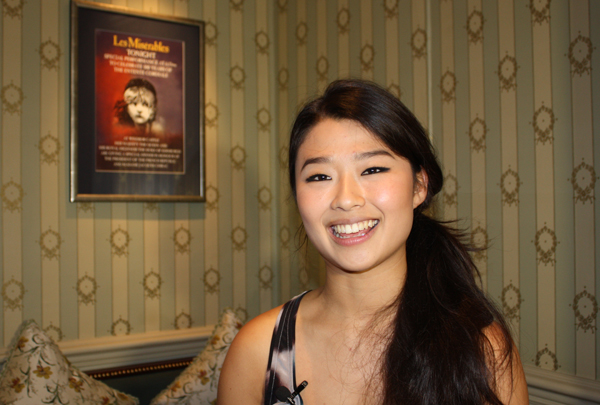 In London’s West End, the largest theatre district in the world, the legendary musical “Les Miserables” made major changes in its cast in June, including a new performer in the female lead role of Fantine. The lucky woman who snatched it was the Korean actress Jeon Na-Young, who was born and raised in Holland. Jeon, 24, is the first Asian to play one of the lead roles since the longest-running musical in West End history premiered 28 years ago.

Before landing the role, she performed in a string of musicals and dramas in the Netherlands, including “High School Musical” in the role of Kelsi Nielsen in 2009, and in the short film “Hitomi” by director Manu de Smet. Her other musical credits include Bianca in “Kiss Me, Kate” and Kim in “Miss Saigon.”

The JoongAng Ilbo sat down with Jeon, who speaks Korean quite well, to talk about how she grew up in the Netherlands and became an actress in Europe.

Q.How did you land the role?

A. Ever since I was a lead in the musical “Miss Saigon” in 2011, I had always dreamed of playing Fantine. In the same year, I auditioned for the role of Cosette in the Korean version of “Les Mis,” but I was rejected for being too young for the role. And then I tried another audition for the role of Eponine in the same musical last May. But right before the final audition, the producer Cameron Mackintosh asked me to sing Fantine’s song, “I Dreamed a Dream,” commenting that I would be better fit to play the role of Fantine. Since I was not prepared, I sang the song while reading the lyrics, and he picked me on the spot.

How did you became a musical actress?

When I attended the Music Theatre Academy in Codarts, Rotterdam, I played a variety of roles in musicals. And after taking the lead role in Miss Saigon, I started to be noticed and starred in a TV drama in Netherlands and Belgium.

You were born and raised in the Netherlands?

Forty years ago, my maternal grandfather came here as a Korean diplomat when my mother was a teenager. My grandfather decided to settle here and my mother married my father, who was a businessman in Belgium. Now all the members of my family are living in The Hague.

Were there any difficulties with your “different” appearance in the Netherlands?

Until 17, I had an aversion to Korea. I even hated looking like an Asian. More than anything else, I didn’t like my father saying that the world is shaped like a pyramid where an only a small number of superior people are at the top.

I thought it was a Korean mind-set. But one day I realized that I couldn’t help admitting that I had Korean sentiment in my blood. Now I am proud of being Korean.

What are your plans on the horizon?

I want to be a songwriter as well as a singer. I also hope to study gugak (Korean classical music) and work as a musical or movie actress in Korea.