Reunions to be held after Chuseok

Reunions to be held after Chuseok 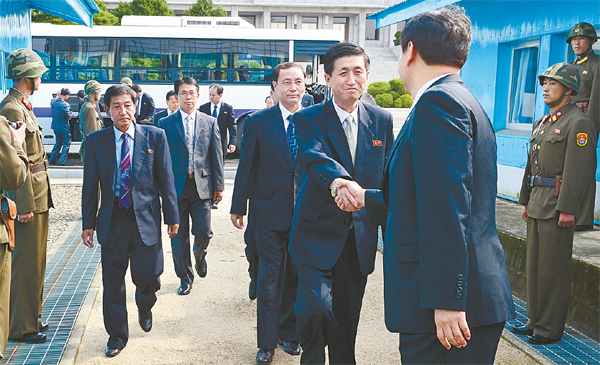 The head of a North Korean delegation, Park Yong-il, center, is greeted yesterday by a South Korean delegate as he crosses a border that separates the two Koreas at the truce village of Panmunjom. South and North Korea held talks to arrange reunions of families separated by the 1950-53 Korean War. [NEWSIS]

South and North Korea agreed to hold reunions of war-torn families after the Chuseok holidays. They struggled to reach consensus on the venue and the size of the first reunions to be held in almost three years and finally succeeded.

Negotiators from the Red Cross agencies of both Koreas held five rounds of talks at Peace House in the Southern part of the border village of Panmunjom from 10 a.m. through 8:55 p.m.

The two sides also had trouble deciding whether to make the reunions regular or whether to include South Korean abductees and POWs in them, according to the Ministry of Unification.

More reunions will be held in November.

After the Chuseok holidays, the Red Cross will hold more talks to discuss further issues.

Before the morning sessions, the negotiators exchanged opening remarks.

“Your side previously told us that North-South relations are so full of knots and tangles,” North Korea’s Chief Negotiator Pak Yong-il said, according to the Unification Ministry. “We hope we, as Red Cross people, can play a role as pioneers to untangle them.”

South Korea requested larger reunions than previous ones in which a total of 200 families met.

“Both the South and the North proposed their own numbers,” the official said.

In order to give a chance to the 72,000 South Korean applicants to finally reunite with their families, Southern negotiators proposed reunions on a regular basis, not just a one-time event, according to the Unification Ministry in Seoul.

“We said we need a fundamental solution to resolve the matter of separated families,” the official said, “such as making the reunions regular, exchanging addresses of the families and also confirming the whereabouts of South Korean abductees or POWs in the North.

“The Northern side didn’t say anything about that,” the official added. “The mood was calm, like normal working-level talks.”

In afternoon sessions, North Korean negotiators proposed a draft of an agreement, but the Unification Ministry refused to divulge its contents.

South Korea has not responded to the North’s proposal for holding separate talks in late August or early September to restart tours to Mount Kumgang. The North shot down South Korea’s suggestion to hold those talks Sept. 25. Seoul says the matter of the family reunions is separate from Kumgang because reunions are a humanitarian issue.

Reopening Mount Kumgang is a thorny issue for the South because the tours could help North Korea earn large sums of money, which could violate UN sanctions against the regime.

North Korea told Seoul on Tuesday through the Panmunjom communication channels that it is wrong to say the issue of reunions is not linked with Kumgang.