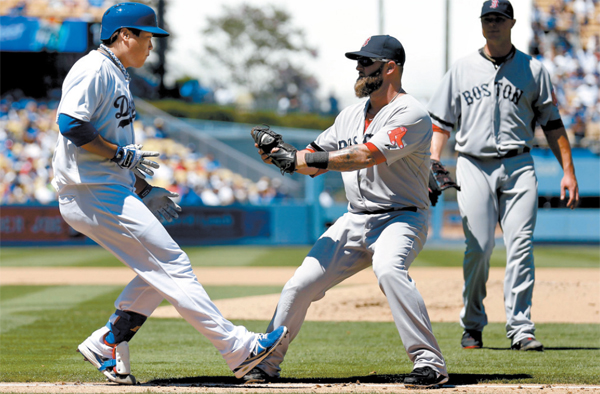 LOS ANGELES - Jon Lester had never faced the Los Angeles Dodgers before, and he handled their lineup with ease.

“For the most part, I commanded the ball pretty well and was able to move the fastball around and get some weak contact from a good-hitting lineup,” Lester said. “I know what I’m capable of. It’s just a matter of going out there and doing it. Since the (All-Star) break, I’ve felt good physically, and I feel like I’m in a good place throwing the ball right now.”

The Red Sox began the day percentage points behind Tampa Bay for first in the AL East. They won at Dodger Stadium for the first time in five games dating to their first visit in 2002, when they were swept in three games.

“He was absolutely phenomenal,” Boston catcher David Ross said. “This was the best fastball location he’s had for me all year. This is the first time I’ve caught him in a while, but he threw excellent.”

Koji Uehara got the final four outs to earn his career high-tying 13th save in 16 chances. He hasn’t allowed a run in his last 18 appearances, going 1-0 with eight saves since July 9.

The Red Sox got to rookie Ryu Hyun-jin (12-5) right away under a searing sun in 82-degree heat. With one out in the first, Ryu hit Shane Victorino with a pitch before Dustin Pedroia reached on an infield single to second. Victorino scored on Mike Napoli’s RBI single.

Gomes followed with his 11th homer on Ryu’s next pitch, scoring Pedroia and Napoli to make it 4-0. Ryu struck out Stephen Drew and Will Middlebrooks to end the inning.

“I was hitting fifth and he threw four first-pitch fastballs before I got up,” Gomes said. “I knew he had good off-speed stuff, good secondary stuff, and the majority of pitchers have good fastballs, so I was hunting the fastball.”

Ryu caught a cold returning from the road trip to Miami, but he said it didn’t affect his pitching. He lost in consecutive starts for the first time in his career.

“The lesson is don’t give up too many runs,” he said through a translator.

The Dodgers trailed 4-2 on Adrian Gonzalez’s RBI double off Craig Breslow with two outs in the eighth. After Breslow walked Hanley Ramirez to put the tying runs at first and second, Uehara ended the inning by striking out A.J. Ellis.

Lester retired eight of the first 10 batters he faced before the Dodgers notched their first hit, a single by Mark Ellis in the fourth.