Lydia Ko one stroke behind leader at Canadian Women’s Open

Lydia Ko one stroke behind leader at Canadian Women’s Open 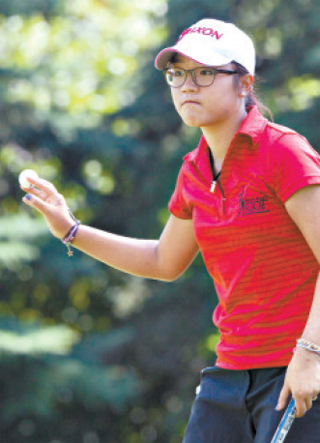 Hedwall, winless on the LPGA Tour, was a record 5-0 last week in Colorado in Europe’s blowout victory over the United States. The Swede had a 10-under 200 total at Royal Mayfair.

“I was a little tired on Monday, Tuesday and also Wednesday,” Hedwall said. “But when the tournament starts I think last week just gave me a lot of energy and self-confidence, so I can’t feel anything.”

“I just feel like from a general standpoint usually coming off of Solheim where your mindset is such an aggressive mode that you usually feed off pretty well the following week because you kind of keep wanting to make putts,” Pettersen said. “You’re kind of in that kind of frame of mind. This is why we work at it, this is why we train. I’m totally fine. I’m not tired at all.”

The 16-year-old Ko had a 67. Last year in British Columbia, the New Zealand amateur became the youngest winner in LPGA Tour history at 15 years, 4 months.

“I was three shots back from the leader yesterday, and I’m one shot back at the moment, so I’m getting much closer to the leader,” Ko said. “I played pretty well out there. I made five birdies and two bogeys. I was overall really happy, and I was 8 under coming into the final round last year, so one shot better, which leaves me in a good place.”

Hedwall had seven birdies and a bogey in the third round after opening with consecutive 68s.

“To be honest, I don’t really remember my round,” Hedwall said. “I have no idea where I make birdies. I just remember making a bogey. I hit it over the green and had a pretty good chip, I just didn’t make the putt.”

Brittany Lincicome and Kim In-kyung were two strokes back at 8 under. Kim had a 65, and Lincicome, the 2011 winner at Hillsdale in Quebec, shot 66. Lincicome played in a group with Hedwall and Pettersen.

“I shot 66 today and got beat badly by these two,” Lincicome said. “Even from the first hole, from the very start of the day we were draining birdies, and I kind of was making my own little inside jokes about our group. We were 8 under after 8, 9 under after 9, and kind of playing match play with everyone else.

“I had a great time. I don’t know about them, but it was just fun to kind of hang out and I think the chatter and the laughter out there kept it light out there, and we made a lot of birdies.”

Top-ranked Park In-bee tied for the second-round lead with Cristie Kerr, had a 74 to fall six strokes back at 4 under. Park swept the first three majors of the season and has six tour victories this year.

Kerr was another stroke back after a 75.

Charley Hull, the 17-year-old English player coming off a strong performance in the Solheim Cup, was 4 under after a 71.