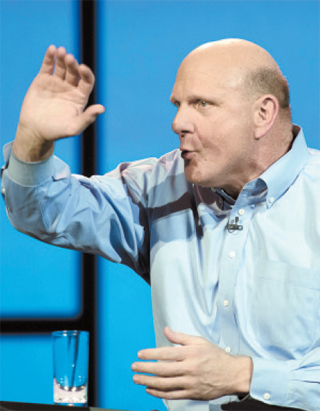 Microsoft Chief Executive Officer Steve Ballmer’s retirement leaves the world’s largest software company in a succession crisis amid the worst slump in history for the personal-computer industry it helped create.

The search committee will consider internal and external candidates to replace Ballmer, 57, who will depart within the next 12 months, the company said in a statement Friday.

Tony Bates, Satya Nadella, Qi Lu and Terry Myerson are the leading choices among Microsoft’s executives, according to people with knowledge of the matter, who asked not to be identified because the process isn’t public.

Ballmer’s planned departure follows a management revamp, the company’s biggest earnings disappointment in a decade and the fifth-consecutive quarterly drop in PC shipments.

Meanwhile, Microsoft remains an outsider in the burgeoning mobile-computing market led by Apple and Google.

“It would be a difficult job, but if you could turn around Microsoft you’d be seen as a hero,” said Brendan Barnicle, an analyst at Pacific Crest Securities in Portland, Oregon. He has the equivalent of a hold rating on the stock. “He’s not really leaving the company in the best financial position.”

Shares of Redmond, Washington-based Microsoft rose 7.3 percent to $34.75 at the close in New York yesterday, for its biggest gain since April 2009. The stock is up 30 percent this year and is still trading below its price at the end of 2007.

As executive vice president, Nadella runs the company’s cloud and enterprise business. He joined Microsoft in 1992 from Sun Microsystems.

Lu came to Microsoft from Yahoo! in 2008 and oversees the company’s applications and services group, which develops products such as Office, Office 365 and SharePoint.

Last month, Microsoft reduced the number of business units to four and gave Myerson, the head of Windows Phone software, the added responsibility for the Windows and Xbox operating systems. Myerson has been at the company since it bought his startup, Interse, in 1997.

“Long term, they have a big problem,” said Dan Niles, portfolio manager at Alphaone Capital Partners in Tiburon, California. “They are moving from a market where they have monopoly profits to a brutally competitive market of services and devices.”

Frank Shaw, a spokesman for Microsoft, said the company isn’t making any executives available for comment.

If Microsoft decides to bring in a leader from the outside, it might consider John Donahoe, CEO of eBay, or try to recruit Facebook Chief Operating Officer Sheryl Sandberg, Pacific Crest’s Barnicle said.

“There’s not a clear internal successor, as some of the potential successors left in recent years,” said David Cearley, an analyst at Gartner in Stamford, Connecticut. “It’ll be difficult for an outsider to come in and change a very strong culture that exists at Microsoft.”

Steven Sinofsky, former head of the Windows division, left the company last year after clashes with executives including Ballmer, people familiar with the situation said at the time. Gates is not being considered, according to people with knowledge of the matter.

Microsoft’s board should look outside the company to replace Ballmer, said Bill George, a former CEO of Medtronic and now a director at Exxon Mobil and Goldman Sachs Group.

“They need fresh blood from the outside, someone from the technology world who’s innovative, creative and willing to take them in new directions,” said George, who’s also a management professor at Harvard Business School. “Microsoft in recent years has missed mobile, search and all of social media, which is why I don’t think they should choose from inside.”

Whoever gets the job will face a list of challenges that recently has grown longer. Last month the company reported profit that missed analysts’ estimates by the biggest margin in at least a decade amid weakening demand for PCs running its Windows software.

Microsoft’s attempt to crack the growing market for tablet computers with the Surface device led to a $900 million writedown of inventory as consumers continued to buy rival products like Apple’s iPad.

Surface, Microsoft’s first-ever homegrown computer, shipped just 900,000 units in each of the December and March quarters, according to IDC.