Baganuur Energy Corporation, the joint venture of Posco and MCS, will use coal from the Baganuur mine in Mongolia to make diesel and dimethyl ether.By Joo Kyung-don

ULAANBAATAR, Mongolia - Driving about three hours east from downtown Ulaanbaatar on unpaved roads through beautiful green grassland, one can find Baganuur District where Posco, Korea’s top steelmaker, is about to begin its energy business in Mongolia.

There is nothing but green grass as far as the eye can see, but Posco says the 2,000-hectare (7.7-square-mile) site is its promised land in Mongolia. Here, the company will build and operate a coal-to-liquid (CTL) plant with its Mongolian partner.

“This will be a stepping stone for us to expand our energy business globally,” said Won Gang-hee, who heads Posco’s Mongolia office, at a press meeting here a week ago. “What we are trying to do here is not just look for profit, but build a business that can contribute to Mongolia’s development.”

The coal gasification business has been expanding in Mongolia recently as a way to utilize the country’s abundant coal deposits.

Germany’s ThyssenKrupp also reached an agreement with the Mongolian government last year to build a CTL plant and coke-making facility. 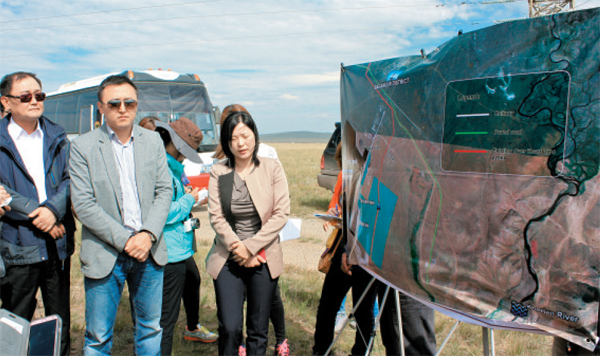 Posco’s Won Gang-hee, left, and Gansukh Bat-Erdene of MCS, second from left, discuss the CTL plant last week at the site in Baganuur. Provided by the company

Since 2010, Posco has been partnering with MCS, Mongolia’s leading conglomerate, to pursue the CTL business as a solution to Mongolia’s reliance on fuel imports and low-grade coal that pollutes the air.

After a feasibility study on a CTL plant last year by Hatch, a Canadian engineering company, Posco and MCS established a 50-50 joint venture called Baganuur Energy Corporation in May. Baganuur Energy is currently in the process of selecting technical advisers for the $2 billion project and acquiring special permission to produce petroleum products from the Ministry of Mining.

The jointly run company will produce 450,000 tons of diesel and 100,000 tons of dimethyl ether a year using the Fischer-Tropsch coal gasification process when the CTL plant is completed at the end of 2018, Posco said. The builders will be Posco Engineering & Construction and MCS International.

MCS, which has 20 affiliates in six sectors, including telecommunications and real estate development, expressed unequivocal confidence in Posco’s brand value and technology. Posco is currently constructing a 500,000-ton synthetic natural gas (SNG) plant in Gwangyang, South Jeolla, scheduled to begin operation next June. According to company, the process at the CTL plant in Mongolia will be 75 percent similar to that in the Gwangyang plant.

“We needed a partner with ability and financial stability,” said Gansukh Bat-Erdene, deputy director at MCS Energy. “We also hope this project will provide opportunities to work in other sectors with Posco.”

The plant’s location, about 20 minutes from central Baganuur District, is ideal for the CTL business, according to Posco. A nearby railroad allows smooth transportation of construction equipment and products, and it is about 12 kilometers (7.4 miles) from the Kherlen River and 5 kilometers from the Baganuur coal mine. The state-run mine is 70 percent owned by the Mongolian government and estimated to have more than 700 million tons in coal deposits.

“You can mine for at least 60 years here alone,” said Dovdon Altangerel, who is in charge of the Baganuur mine field. “There are lots of coal mines in Mongolia, but what is special about this mine is that it is close to Ulaanbaatar.”

Posco said more than 600 jobs will be created when the plant gets up and running and 2,000 jobs will be offered during the construction phase. Although the river is nearby, the plant will limit its use of water to protect the environment. It will recycle used water and heat produced during the gasification process to generate electricity.

According to Posco, the Mongolian government is offering substantial support for the project, such as tax benefits, and has high hopes that the CTL plant can play a pivotal role in solving the country’s energy problem.

“Mongolia does have crude oils, but they are located sporadically, and it doesn’t currently have the resources to integrate and refine, which forces the country to import 92 percent of its oil from Russia,” Won said. “Since the country has lot of low-grade coal, we thought producing diesel from coal would be much more efficient and less costly.”

According to data from the World Bank and Posco, real growth of the Mongolian economy averaged 9 percent per year for the past decade, but the average annual growth of diesel was 14 percent and gasoline was 5 percent. As the country’s economy develops, Posco estimates the use of petroleum will increase to 3.5 million tons by 2020, a 337.5 percent increase from last year.

“Diesel produced by the plant will be mainly used in large coal mines, and we estimate 70 percent to 80 percent of our sales will come from there,” said Won. “MCS has its own mines in southern Mongolia and uses 200,000 to 300,000 tons a year. Producing 400,000 tons of diesel isn’t excessive at all.”

The CTL facility also will include its own power plant with a capacity of 200 megawatts to cover peak demand. Mongolia currently imports about 175 megawatts from Russia during peak demand periods, Posco said.

Although there is criticism that mining and processing coal poses a threat to the natural environment, Posco says the plant will help reduce air pollution, which has been considered one of Mongolia’s biggest problems.

According to data from the World Bank, air pollution in Ulaanbaatar in 2008 and 2009 was 280 on its index, more than five times worse than San Diego.

Posco said the production of dimethyl ether, which is derived from synthetic gas coming from coal gasification, will help the country’s air pollution problem. Dimethyl ether is cheaper than liquefied petroleum gas and has lower emissions of carbon and particles compared to other fossil fuels.

However, the company said it is not planning to produce and sell other byproducts, such as ammonia, of the coal gasification process as there is little demand in Mongolia.

Posco says it is too early to assess the potential profitability of the project, though it believes products from the CTL plant will be more competitive than imported Russian fuel.

In addition to the CTL plant, Posco’s hopes to build a combined cycle power plant after its Posco Energy affiliate formed a consortium with France’s GDF Suez, Japan’s Sojitz Corporation and Mongolia’s Newcom Group. The consortium, in which Posco Energy has a 30 percent stake, was selected as a preferred bidder for building a 450-megawatt plant.

Industry observers say Posco eventually will try to develop mines in Mongolia to secure minerals after burnishing its reputation with various projects. The company has been also trying to boost its brand value through its Chungam Foundation, which funds scholarships and medical help.

“Its steel business has been hampered by the worldwide economic slump, so Posco has been trying to boost energy and material sectors,” said Kang Tae-hyun, an analyst at E-Trade Securities. “As the company tries to secure minerals worldwide, Mongolia is certainly one of the favored markets.”