Products that have your number

Products that have your number

Across all sorts of industries in Korea these days, so-called “number marketing” is an emerging trend. From automakers to food manufactures, more and more businesses are looking for lucky numbers that will help consumers easily think of their products and remember them longer.

For instance, take bride-to-be Shin Ji-eun. The 28-year-old recently wanted to purchase a large-screen LED television for her new living room, but she had a hard time figuring out what size she needed. Shin wanted a good one, big enough for her home but not too overwhelming.

“I heard that the actual television size feels a lot different at home than when you see it in the store,” she said.

Fortunately, Samsung has developed an easy formula for television shoppers.

“I chose a 50-inch one because people usually add 20 to the home’s size in pyeong,” Shin said. “I am glad that the size fits very well as if I purchased it at a store.”

A pyeong is a Korean unit of area, about 3.3 square meters, often used when measuring homes or land. 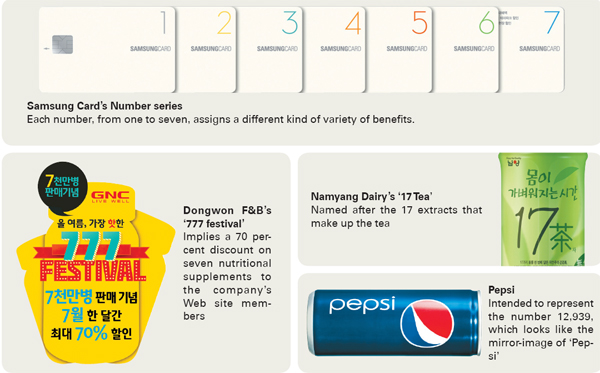 The so-called “Plus 20” formula is Samsung Electronics’ simplified version of the television size recommendation issued by the U.S. Society of Motion Picture and Television Engineers. The group recommends multiplying the distance between the TV and the sitting areas by 0.667.

However, the marketing team at Samsung Electronics thought that most consumers found that formula too complicated. Instead, because apartment layouts in Korea are usually quite similar, they generated a simpler formula.

Since Shin’s new home is 30 pyeong, or 99 square meters, Shin added 20 and purchased a 50-inch television.

“Most new television models are very thin,” said an official at Samsung Electronics. “So we thought there would be no problem having a bigger model than the old cathode ray tube televisions.”

Korea’s largest household appliances maker, Samsung, started the “Plus 20” marketing in March specifically for its smart television products. It turned out to be quite effective.

LED televisions in the 40-inch range used to sell the most among newlyweds - about 53 percent of all LED TV sales in the second quarter of 2012. But by the end of the second quarter of this year, their sales dropped to 41 percent. However, sales of larger models climbed from 7.8 percent to 26 percent over the same period. 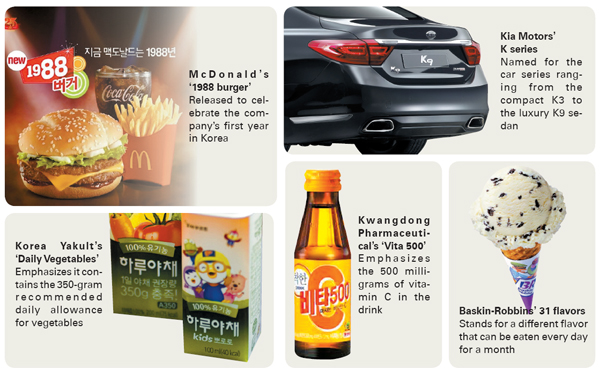 The U.S. consulting firm McKinsey and Co. wrote in a report that “number marketing is the cheapest but most effective way to promote a product.”

For instance, No. 4 means death in many Asian countries, while No. 6 is often associated with the devil in European cultures. No. 1 is often considered a beginning, while No. 7 is considered lucky.

In a product group in a series, bigger numbers mean better quality. Computer chipmaker Intel’s processor “Core i” series is an example. The Core i3 is a popular, less-expensive model, while the Core i5 is moderately priced and the Core i7 is the fanciest one for professional use.

Korea’s second-largest automaker, Kia Motors, also names its models after the Nos. 3, 5, 7 and 9. A bigger number tagged with the letter K means a more expensive model with more functions. The “K9,” for instance, is Kia’s largest sedan and its most expensive.

Consumer product giant Braun follows the same system for its electric razors. Its Nos. 1 and 3 models are popular entry-level products, while the Nos. 5 and 7 are a level higher.

The No. 1 card, in comparison, offered only one of those discounts, but at a higher value, and included a valuable point system and air mileage system.

On the other hand, Hyundai Card uses the Roman alphabet and numbers to distinguish its lines of cards. The company’s best-known line of cards, the “M” series, offers similar benefits, but the M3 card gives users more points than the M2 card on each transaction.

Sometimes, other types of meaningful numbers are used for marketing. McDonald’s Korea launched the “1988 Burger” exclusively in Korea in the first half of this year in reference to the 1988 Seoul Olympic Games.

Pepsi’s lucky number is 12,939 because the brand name looks like the mirror image of 12,939. The company had an ad campaign a little while ago, offering a free cola to the 12,939 customer at a selected store.

Since July, Dongwon F&B has been commemorating July 2002, when it launched a line of health-care products, with a series of discounts and promotions called the “777 festival.” It provides a discount up to 70 percent on seven nutritional supplement products exclusively to its Web site members.

Baskin-Robbins has long used No. 31 for its marketing, telling customers they could have a different flavor of ice cream for every day of the month, even though many stores actually sell more than just 31 flavors.

Some companies promote their products’ effectiveness with a number. For its cosmetics brand SK-II, P&G Korea chose No. 14, saying 14 days of use would make a miracle on your skin. The campaign was so popular the company launched a men’s version.

Korea Yakult, the beverage manufacturer, took note that the daily recommended allowance of vegetables for adults is 350 grams, so it launched a brand of vegetable juice called “Daily Vegetables,” subtitled “350 balance, veggies for the day.” The brand emphasizes that a person can get their daily quota of vegetables just by drinking one bottle.

And the examples could go on. Kwangdong Pharmaceutical’s “Vita 500” is named for the 500 milligrams of vitamin C in each bottle. Namyang Dairy’s “17 Tea” shows the tea is made of the extracts from 17 key oriental medicine ingredients.