Audit board chief decides to resign

Audit board chief decides to resign 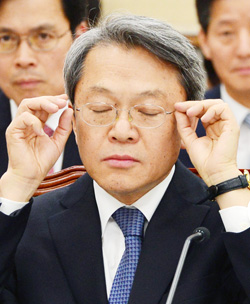 Yang Kun, head of the Board of Audit and Inspection, has expressed his intention to resign, fueling a controversy surrounding the political neutrality of the public spending watchdog.

Yang told President Park Geun-hye on Friday that he will step down and sources at the Blue House confirmed it. Yang was appointed to head the Board of Audit and Inspection by former President Lee Myung-bak in March 2011 and had about 19 months remaining in his four-year tenure.

The Board of Audit and Inspection said yesterday that Yang’s farewell ceremony will take place today, indicating that Park has accepted his resignation.

While Yang and the Blue House remained tight-lipped about the reason for his sudden departure, speculation grew that he decided to leave because of a scandal involving the board’s audits on a signature project of the Lee administration.

The Board of Audit and Inspection made its first audit report on the four-rivers restoration project on Jan. 27, 2011. At the time, the report concluded that the rivers needed to be managed more effectively and safely against floods. The audit board, however, issued two more reports this year giving negative evaluations of the project, implemented in 2009 at a cost of 22 trillion won ($19.7 billion).

In its January report, the board said it discovered problems with the durability of 11 reservoirs created through the project.

The board also concluded in its July report that the Lee administration created the four-rivers project to sustain an earlier promise to build a cross-country canal. That invited an influx of problems such as collusion to win bids between construction companies, inflated costs to run the project and issues with water quality, the board said.

After fierce opposition by the public, Lee scrapped his plan to build a canal to connect Seoul and Busan, but the board said the master plan of the four-rivers restoration project nonetheless was designed to incorporate the canal construction plan.

As the watchdog’s audit conclusions differed during the Lee administration and after Park took office, the ruling party expressed concerns about the agency’s political neutrality.

On July 15, Chairman Hwang Woo-yea of the Saenuri Party issued a rare criticism toward the public spending watchdog. “The Board of Audit and Inspection gave three different audit reports on the same project,” Hwang said. “That raises questions about its credibility. The audit board must conduct a self-audit to make clear why its conclusions differed.”

Political allies of former President Lee also raised their voices, demanding that Yang step down. Park, however, sided with the audit board instead of criticizing its flip-flop.

“The truth [about the four-rivers project] should be revealed more specifically in the future to clear up doubts,” Park said. “The audit board also must come up with necessary follow-up measures.”

Although Park supported the audit board, sources at the Blue House said they were displeased with the watchdog’s unrefined way of handling various situations.

“Right now, the Board of Audit and Inspection cannot avoid investigating the policies of the Lee administration,” said a senior official of the audit board. “From Yang’s perspective, he had to think about the president who appointed him to the post. The audits on the four-rivers project are the classic example.”

According to the source, Yang decided to tender his resignation before the National Assembly opened its regular session in September because the audits could be interpreted politically.

Others also said Yang reportedly had disagreements with other senior officials in the agency who were promoted under Park, including Secretary General Kim Young-ho.

Sources said Yang and a group of senior audit board officials clashed before the watchdog released its July report on the four-rivers project. At the time, Yang was reluctant to issue a negative conclusion on the project, but other officials protested and Yang’s opinion was ignored, they said.

“We even heard a rumor that Yang became an outsider because of the audit on the four-rivers project,” said a senior official from the ruling party. “If he was on poor terms with the officials appointed or promoted by Park, that means he was not on good terms with the Blue House.”

Other political observers said Yang’s resignation was inevitable. Speculation was high that the Blue House wanted to replace Yang, but the Park administration was overwhelmed with a series of botched ministerial appointments during first several months of her presidency.

It was not the first time the head of the Board of Audit and Inspection has left before completing his term after a new president takes office. Kim Young-jun, appointed by Roh Tae-woo, left in the middle of his term after Kim Young-sam became president. Jeon Yun-churl, appointed by Roh Moo-hyun, also resigned shortly after Lee Myung-bak took office.

Nor is it the first time the political neutrality of the audit board has been called into question. When Jeon resigned, he said he had decided to leave despite his duty to complete his four-year term in order to allow the new government to push forward with its agenda. Jeon was reappointed to the post in October 2007 by Lee’s predecessor, Roh, but faced mounting pressures under the Lee government. He stepped down in May 2008, three months after Lee’s inauguration.

Following Yang’s resignation, the opposition Democratic Party yesterday demanded that the Blue House issue a public explanation. “The head of the Board of Audit and Inspection was guaranteed to have his independence from the government and to have his tenure,” said Park Yong-jin, a DP spokesman. “The Blue House must explain the speculation about the political pressure on Yang.”