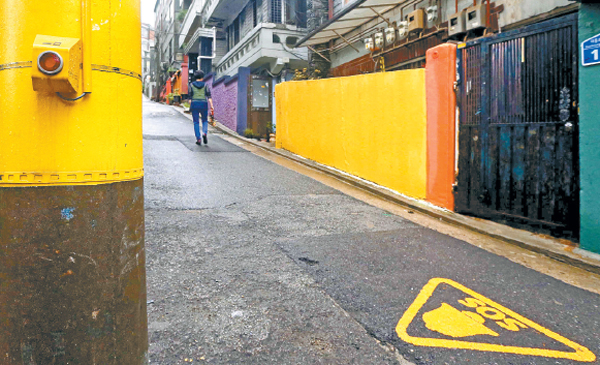 Alleys in Yeomni-dong, Mapo District in western Seoul used to be called “Gotham” after the crime-ridden Gotham City of the Batman movies. But, after the environment was brightened up and patrolled by residents, crime has fallen. By Kim Kyung-bin

Whenever 11-year-old Kim Mi-jin wanted to hang out with her friends at a playground near her house in Yeomni-dong, Mapo District, her parents told her not to.

“Strangers were always hanging around in alleys around the playground,” Kim’s mother told the JoongAng Ilbo. “It wasn’t a good idea to send children to play in that dark no man’s land.”

Yeomni-dong was known for elevated rates of crimes like robbery and rape, and the National Police Agency said it was a neighborhood that needed extra patrols. Kids in the neighborhood called it “Gotham-dong” after the crime-infested Gotham City in the Batman movies. Like the citizens of Gotham, residents of Yeomni-dong locked their doors and walked home quickly after dark.

But Seoul’s mini Gotham has lightened up recently. Mi-jin often hangs out with her friends on the playground. “Because of the Sogeum-gil that was created recently, the entire atmosphere her has changed,” she said, “and my friends who live elsewhere have started coming to my place.”

Started from last year, about 100 residents in Yeomni-dong created a 1.7-kilometer (1.1-mile) Sogeum-gil, literally a salt road, named for the salt warehouses that the area was famous for in the past. Along the 1.7 kilometer stretch of lanes and alley, they painted walls bright colors, added murals, painted the street lamps yellow, installed emergency alarms and put up more CCTV cameras. They took pots of flowers in their houses and made them exterior decorations.

Residents of six households volunteered to do patrols in the evening hours after taking self-defense classes at a local police station.

“The number of crimes in Yeomni-dong has decreased appreciably since the Sogeum-gil was created,” Seo Gi-un, head of the neighborhood watch, told the JoongAng Ilbo.

Yeomni-dong is a success story for the Seoul Metropolitan Government’s campaign to clean up crime-ridden districts. The city government took inspiration from the Crime Prevention through Environmental Design, or CPTED, a movement that has been used in Western countries like the U.S. and Australia. The city government has set up a 575 million won budget to support citizens improving their neighborhood to prevent crime. Local government officials from South Chungcheong and Jeju Island recently visited Yeomni-dong to see how the program works.

“Because this is our hometown, we know what we have to do to improve public security,” a Yeomni-dong resident said.