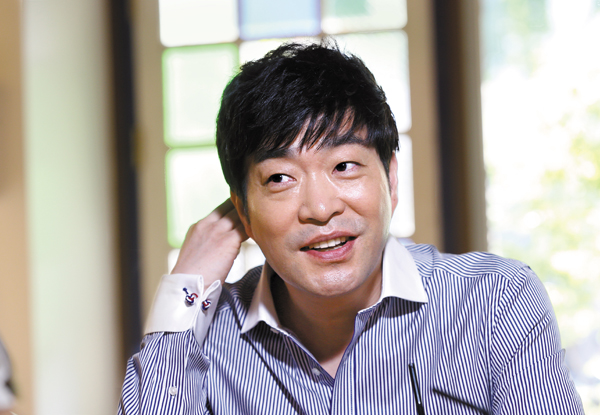 Right now, the hottest actor in Korea isn’t known for his pretty face or youth. It is veteran actor Son Hyun-joo, the star of the hit movie “Hide and Seek,” which has sold more than 4 million admissions and made 28.9 billion won ($26 million) since its release on Aug. 14.

Just two months before “Hide and Seek,” Son also starred in “Secretly, Greatly,” which had one of the best openings in Korea and made nearly 49 billion won.

In addition, Son has been impressing people with his TV work. He starred in last year’s hit on SBS, “The Chaser,” which pulled in strong ratings and won him the best television actor prize in this spring’s Paeksang Arts Awards.

Son talked with Ilgan Sports, an affiliate of the Korea JoongAng Daily, about the successes he’s been having recently.

Q. Did you feel pressure while working on “Hide and Seek” because you are better known as a television actor rather than a movie actor?

A. I was really nervous that people would start talking like “Son Hyun-joo tried making the move to movies from dramas and now he is not doing so well.” Fortunately, the movie broke even quite quickly, so I was relieved.

The budget for the movie was relatively small at 2.5 billion won. You must have felt a little insecure about the small budget. Why did you decide to work on this movie?

When I was reading the scenario, I was so terrified that I had to stop reading two or three times. Then I felt like I wanted to talk to the director about why he wrote such a story. Then, I thought if I were to do this movie, I could finally let go of my character from “The Chaser.” But I didn’t want to look easy by saying yes to the role too quickly after I met the director, so I met with him three or four times and then said yes.

Did your deal give you a percentage of the film’s revenue?

I’m no Bae Yong-joon or Jang Dong-gun, so I didn’t have that kind of contract. I’m very thankful that so many people are coming to watch the movie. I noticed that there are many people in their 40s and 50s at the theater watching this movie, which made me realize that they are the reason I am where I am now. I’m really thankful to them.

You were playing a really paranoid character in “Hide and Seek.” Was that a hard role?

Yes. There was not one scene where I could relax. On the set, Director Huh [Jung] often held a timer, and even watching him doing that made me nervous.

In the drama “Golden Empire” on SBS, you played a rich man. How did that feel?

I felt awkward because it was the first time I played a character with so much money. When I was acting as someone from a normal family, I could really enjoy eating my food, but as a rich character I didn’t get to do that.

I’m not sure if that is what rich people are like in real life, but I felt like such role should be played by someone who is used to acting rich.

What do you want to do after you are done filming the drama?

I want to go mountain climbing. I have thought about going to Nepal or Japan.