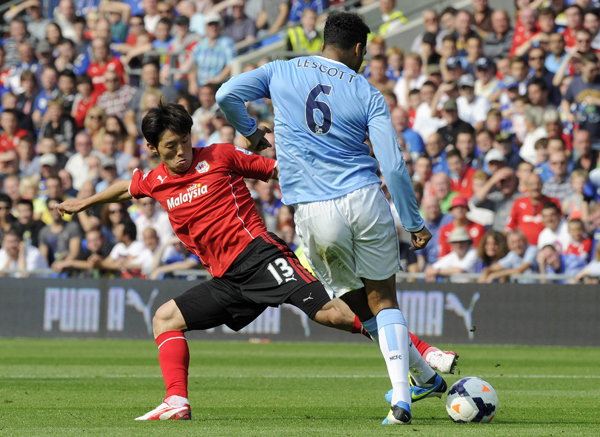 Fraizer Campbell scored twice to give Premier League debutant Cardiff a 3-2 victory over the 2012 champions, who have spent heavily during the offseason to win the title again

“We’ll be the underdogs for a lot of the games this season but, as we showed, we’ve got great determination and hopefully that’ll see us through,” Campbell said.

Signed for just ￡600,000 ($930,000) in January from Sunderland, Campbell helped Cardiff gain promotion and is now showing he can cut it in the Premier League again.

As Cardiff was winning at home, Swansea lost, 1-0, at Tottenham.

The blow of Gareth Bale’s impending departure to Real Madrid has been softened for manager Andre Villas-Boas by opening the season with back-to-back wins.

Roberto Soldado scored the winner from the penalty spot, just as he did in Tottenham’s league opener at Crystal Palace last Sunday.

City has already experienced an early setback despite spending more than $140 million and replacing manager Roberto Mancini with Manuel Pellegrini after finishing without a trophy last season.

The scintillating 4-0 rout of Newcastle on Monday already seems to be a distant memory.

Although Edin Dzeko put City in front with a fierce striker seven minutes into the second half, Aron Gunnarsson slotted in Cardiff’s equalizer on the hour.

Then Campbell, a former United striker, made his impact.

Peter Whittingham’s swinging corner was misjudged by City goalkeeper Joe Hart, and Campbell pounced at the far post, netting from close range in the 79th.

“Defending set-pieces is the duty of all the team - not just the goalkeepers and the defenders,” Pellegrini said. “It does not matter who is guilty with the two corners, conceding from two corners is too much, it is too important an area.”

Although Alvaro Negredo pulled one back for City in stoppage time, it came too late for the visitors to equalize.

Pellegrini, though, concluded that his team “did not play badly.”

“We played against a very difficult team. They were with 10 players in their own box and it was very difficult for us to try to score,” the Chilean said.

At White Hart Lane, Tottenham was angered not to be awarded a spot kick when Andros Townsend was fouled by Jonjo Shelvey just before half time - a free kick was given despite the offense being committed inside the area.

But when Townsend was tripped by Shelvey again after the break, a penalty was given and Soldado slotted past goalkeeper Michel Vorm in the 58th.

“There was contact and a foul for the first one,” Swansea manager Michael Laudrup said. “I didn’t think the second one was a foul.” AP