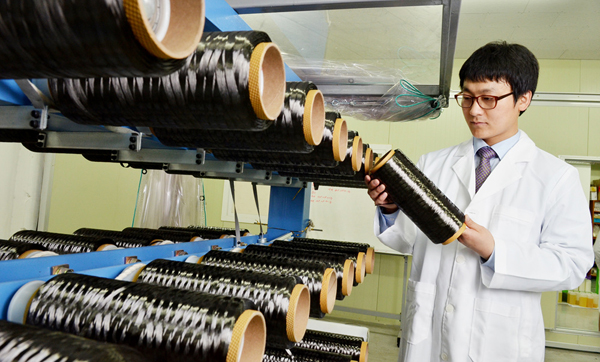 In a bid to boost its chemical business, Hyosung Group has announced that it will expand investment in production of polypropylene, triacetyl cellulose (TAC) films and carbon fiber.

Hyosung, one of the top 30 conglomerates in the country, has been a leader in the fiber industry. It is the nation’s largest producer of spandex, and manufactures tire cords and airbag textiles. It is also considered a heavyweight in manufacturing power transmitting lines and ATM machines.

However, the announcement yesterday shows the group sees the chemical business as its next growth engine.

“To grow up as global chemical company, we are looking to expand production of polypropylene and TAC films as well as carbon fibers,” said Hyosung Vice Chairman Lee Sang-woon. “We are currently building a long-term plan to expand chemical business.”

The group said it will start by investing 280 billion won ($251 million) in its Yongyeon plant in Ulsan to expand production of propylene, used in polypropylene, a kind of plastic. It aims to increase annual production capacity from 200,000 tons to 500,000 tons by 2015.

The conglomerate said that with the growing development of shale gas, the price of propane in 2015 is expected to be two-thirds of its current price. Hyosung has developed technology for extracting propylene from propane gas through a dehydrogenation process.

“As naphtha cracking, which is the traditional way of producing propylene, is expected to lose momentum as oil prices rise, our product will be more and more competitive,” the company said in a statement.

Hyosung also has high hopes for TAC films as LCD polarizers, and construction of its new plant in Oksan, South Chungcheong, is expected to be completed next month. Its second TAC film plant will have an annual capacity of 60 million square meters and is expected to begin commercial production next year. The group built its first TAC film plant in Ulsan in 2009 with 50 million square meters (12.4 acres) of annual production capacity.

Hyosung said that because of the rising popularity of LCD TVs, smartphones and table PCs, demand for TAC films is increasing. Although most LCD panel producers in Korea import TAC films from Japan, the company is confident it will be able to achieve a market share in the double digits by next year.

Hyosung, meanwhile, also is expanding its carbon-fiber business as lightweight products are becoming popular in the aerospace and automobile industries. The company expects the global carbon fiber market to grow to $5 billion annually by 2020.

Hyosung announced it will invest 1.2 trillion won by then to increase its production capacity to 17,000 tons a year. The company currently has a carbon fiber plant in Jeonju, North Jeolla, with an annual capacity of 2,000 tons.