Ban Ki-moon still champing at bit to go to North

Ban Ki-moon still champing at bit to go to North 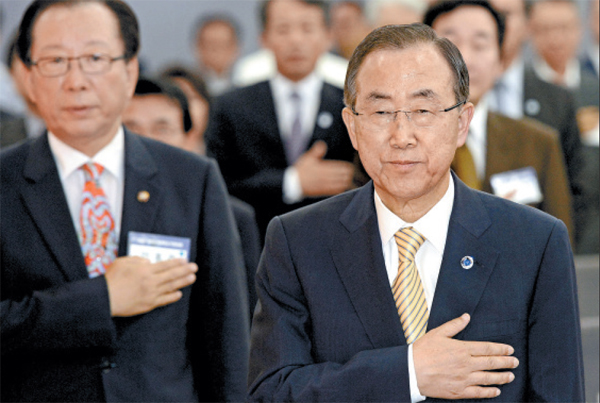 UN Secretary General Ban Ki-moon, right, attends the Post-2015 Korea Forum organized the by the Ministry of Foreign Affairs in Seoul yesterday. Ban has been on a six-day return to his homeland of Korea since last Tuesday. [NEWSIS]

“I have announced many times before that I am willing to take on whatever role for improved South and North Korea relations [as UN secretary general],” said Ban during a press conference at the Ministry of Foreign Affairs in central Seoul.

“I will consult with North and South Korean authorities over the matter of a visit as UN secretary general,” said 69-year-old Ban yesterday.

Ban delivered a speech at the National Assembly last October in which he said he would consider going to North Korea in the right environment to mediate relations between the two Koreas.

The second-term UN chief also gave high marks to the Park Geun-hye government for its handling of North Korea. Ban noted that Park took a “firm but well-controlled move based on North Korean policy principles” in enforcing a package of UN sanctions against the communist state in the wake of Pyongyang’s third nuclear test in February. Relations between Seoul and Pyongyang froze earlier this year.

After the UN Security Council’s unanimous passing of sanctions on the North in March, a cash-strapped Pyongyang threatened nuclear war with South Korea and the United States and abruptly withdrew its 53,000 workers from the Kaesong Industrial Complex in April.

Relations between Seoul and Pyongyang are thawing after successful negotiations to restart the joint industrial complex and reunions of families separated by the 1950-53 Korean War.

“I hope the South and North will keep up this momentum [for improved relations] and achieve constructive strides over inter-Korean issues such as the North’s nuclear program.”

On President Park’s proposal to construct a peace park within the Demilitarized Zone (DMZ), Ban said the UN began looking into ways to contribute to the idea. He said he told the president the UN would give full support to the idea.

When asked if he has exchanged thoughts on inter-Korean relations with North Korean Ambassador to the UN Sin Son-ho, Ban said he has met him “from time to time, stressing the importance of forging improved Seoul-Pyongyang relations.

“I [also] told him the position of the UN on the North when relations between the two Koreas went sour [earlier this year].”

Ban, who served as foreign minister during the Roh Moo-hyun government from 2004-06, became the eighth UN Secretary General in January 2007.