McCain sees no six-party talks in the near future

McCain sees no six-party talks in the near future 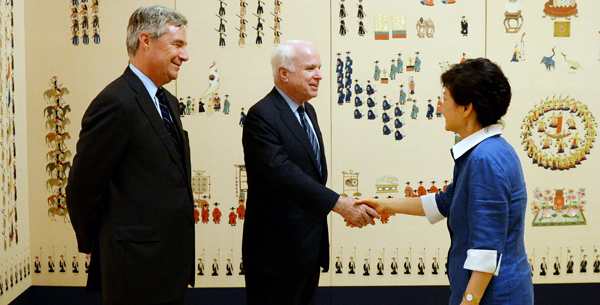 Senator John McCain, who ran for the U.S. presidency in 2008, said six-party talks are not likely with Pyongyang until “the North Korean regime shows meaningful steps towards denuclearization.”

He said until denuclearization of the North was accomplished, “there should be no relaxation of pressure and no resumption of six-party negotiations.”

Park met with Arizona’s McCain, a Republican, and Sheldon Whitehouse, a Democrat representing Rhode Island, at the Blue House.

Afterwards, McCain and Whitehouse held a press conference at the Asan Institute for Policy Studies in central Seoul emphasizing the United States’ military commitment to Korea and urging trilateral cooperation among Washington and its two democratic allies in the region, Seoul and Tokyo.

McCain, in his first trip to Seoul in two decades, was skeptical that a peace treaty between the North and South could be signed soon.

“I cannot imagine the North Korean government allowing a free and fair election with international observers,” he said. “It seems to me that would have to be the basis of a peace treaty.”

McCain talked about the Korea-U.S. alliance and how it has elevated South Korea.

He said that he and Whitehouse met with Prime Minister Shinzo Abe in Tokyo. McCain said Abe wants to “improve relations with Korea.”

McCain had sharp words for China regarding its policy of returning North Korean defectors to Pyongyang.

“I believe the Chinese government should be embarrassed that when a man or woman is able to escape the gulag, they are apprehended and sent back to certain torture if not death.”

McCain and Whitehouse stopped in Japan and China previously as a part of their Asia tour.