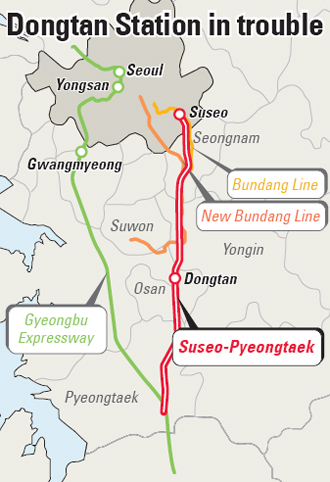 The building of a new KTX station in the Dongtan New Town area, Gyeonggi, is expected to run behind schedule as two state-run developers fail to see eye-to-eye on the budget.

At the heart of the quandary is a long-running conflict between LH Corporation and Korea Rail Network Authority as to which side should pay construction costs of 299.2 billion won ($269 million).

The new station is set to accommodate millions of commuters from the new town in Hwaseong City as part of a KTX Suseo-Pyeongtaek Line, a bullet train development project that the central government has been working on since 2009.

But only 16 percent of the construction of the station has been completed so far.

Even though the deadline is the end of 2014, it’s already clear the station will not be completed by early 2015 at the earliest.

Korail says LH should pay for the entire construction.

“When Korail discussed cost issues about Dongtan Station with the Ministry of Land, Infrastructure and Transport, LH Corporation, the builder of the new town, was supposed to be responsible for the entire cost,” said a source at Korail.

LH is saying that decision was arbitrarily made without consulting the public construction corporation, adding that it is only responsible for part of the infrastructure.

“In the statement detailing budget issues, we agreed to pay for the so-called Great Train Express (GTX) venue of Dongtan Station,” said a source from LH.

LH takes the position that it will spend a total of 74.4 billion won for the fast underground train project.

In 2011, the Land Ministry tried to mediate the conflict to no avail. Afterward, the ministry went on to suggest different possible solutions.

One of them obliged that the two parties split the costs but LH declined this idea.

In a desperate attempt to keep the project going, the ministry is also considering lending money to get the station built.

The train project is considered a major infrastructure project to accommodate the swelling population of the Gyeonggi region.