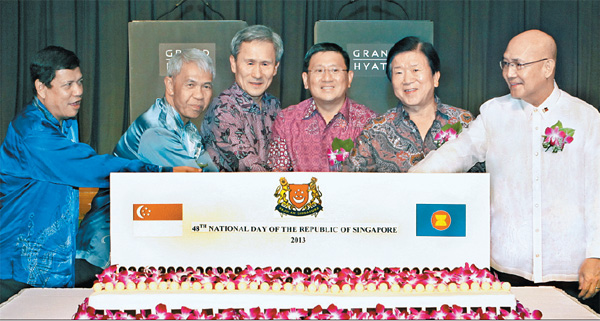 The Embassy of Singapore held a reception to commemorate the country’s National Day on Friday at the Grand Hyatt Hotel in central Seoul. Singapore’s ambassador to Korea, Peter Tan, highlighted the deepening ties between Singapore and Korea.

The event started with the screening of a slide show featuring cultural and economic exchanges between the two nations.

Tan said that the collection of images showed how the two countries have worked together.

“The video montage that we have been playing is a showcase of the excellent relations between Singapore and Korea,” he said.

“It also shows the many aspects of the engagement with our friends in Korea - be it over formal meetings or over a golf game - which is commonly known as a ‘green meeting’ or even over noraebang,” the ambassador added. “The bonds and friendship developed over these exchanges have certainly contributed to closer relations between our two countries.”

The festivities, which celebrated the 48th anniversary of Singapore’s independence from Malaysia, were in the form of a reception that was attended by a number of Korean political leaders, including National Defense Minister Kim Kwan-jin, and business executives.

The ambassador’s welcoming remarks were followed by a speech by the Korean defense minister, who echoed the ambassador’s satisfaction with Korea-Singapore ties and also praised the achievements of the fellow “Asian tiger.”

“Singapore is assessed by many global institutions as having the top national competitiveness and anti-corruption indexes and is widely regarded as a great country for business. According to Koreans living there, modern-day Singapore is the result of efficient government, clean administration and transparent law and policies,” the minister said.

He continued, “I attended on several occasions the Asia Security Summit held at the Shangri-La [hotel], and each time I witnessed the true depth of Singapore, which has surely solidified its place as a mecca of peace in Asia and the world.”

Singapore’s Minister for the Environment and Water Resources Vivian Balakrishnan visited the Yeosu Expo in the same year, while Minister for Foreign Affairs and Law K. Shanmugam visited Korea in 2012.