Director of Hanwha E&C Kim Chul-hoon, second from left, meets with Iraqi journalists in Baghdad to discuss the simplification and streamlining of customs procedures for the Korean company. Provided by the company

Hanwha Engineering & Construction, the construction arm of Hanwha Group, has received a boost for its mega construction project in Bismaya, Iraq, after the country adopted a law simplifying customs procedures for duty-free materials used in the national project.

Bismaya, a new city that will be the site of a national housing complex of 100,000 units, was authorized by the Iraqi government as part of its postwar recovery. It is the largest overseas construction project ever for Hanwha E&C.

The Iraqi government recently passed the Special Enforcement Ordinance on the Improvement of the Tax-Exempt Customs Procedures for National Business, which streamlines duty-free customs clearance on foreign materials related to national projects. 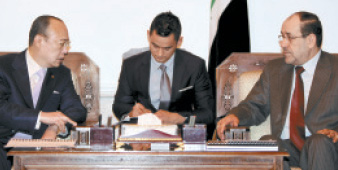 Hanwha E&C expects customs clearance, the first prerequisite of overseas construction projects, to be more transparent because it will be able to track each step in the process, as well as significantly reduce the time for customs clearance.

It took an average of two to three months for duty-free materials to come through the port of Umm Qasr, with some shipments tied up for six months if documents were lost.

Hanwha expects the breakthrough will not only reduce logistics costs, but also play a big role in obtaining additional orders from Iraq in the future.