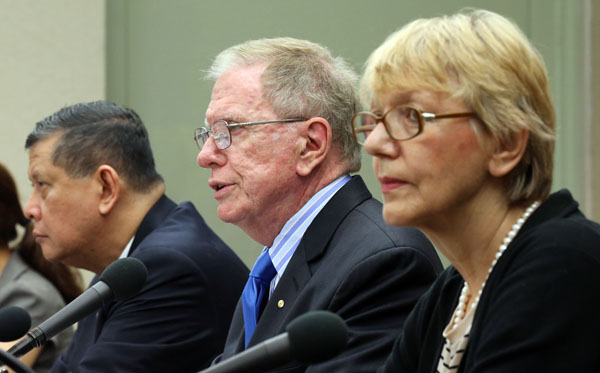 Michael Kirby, center, chairman of the United Nations Commission of Inquiry on North Korea, talks to reporters in Seoul. By Kim Seong-ryong

The three-member UN Commission of Inquiry on Human Rights in the Democratic People’s Republic of Korea (COI) said testimony heard by the commission supported the existence of prison camps for political prisoners “where conditions are inhumanely harsh,” and where prisoners live on rats, mice, grasshoppers and grass.

There was ample evidence of public executions in prisons as well as “believable testimony” on the limitations of freedom of movement and limitations on access to independent and reliable news media and the Internet.

Michael Kirby, chairman of the commission, said in a press conference at the Press Center in Seoul yesterday that on top of testimony consistent with previous documentation, there was new evidence in the areas of trafficking of women and abuse of women in prisons and other places, piracy, and forced abortions for female prisoners.

Kirby said there was extremely vivid testimony on “a state policy of abducting people, often on the high seas, sometimes fisherman, and under conditions of great cruelty and what may be an offense against the international law of piracy.”

Other allegations addressed by the COI have yet to be verified, he said, such as the contention that North Korea ordered policies leading to deliberate starvation of parts of the population or that medical experiments were performed on mentally disabled people, dwarves and other vulnerable groups.

The three-member commission was comprised of Kirby, an Australian who spent 35 years as a judge, Sonja Biserko, a Serbian human rights expert, and Marzuki Darusman, the Indonesian UN special rapporteur on human rights in North Korea since 2010.

They heard from about 50 witnesses in public hearings in Seoul over the past ten days and now head to Tokyo for more hearings. The purpose of holding the public hearings, the commission said, is to raise international awareness of the human rights situation in North Korea.

Kirby said that while no final conclusions have been reached, the testimonies were believable, repeated, highly specific and some cases were supported by satellite images.

The commission said it has been in contact with North Korean officials and had sent a letter to its leader Kim Jong-un inviting a representative to the hearings.

North Korea responded last week saying the hearings were a slander against the government and people of North Korea.

Kirby recalled a vivid moment in which a former political prisoner was asked if his testimony about burying political prisoners were indeed true. “He responded with a look of astonishment, and said, ‘How can you say this to me? In fact, I saw hundreds of bodies I was forced to put in a pot, burn in a pot.’” The ashes of the killed prisoners were allegedly spread in nearby fields.