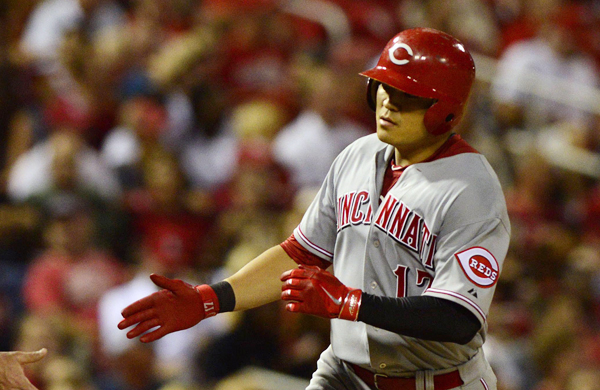 Choo Shin-soo of the Cincinnati Reds has reached a milestone, hitting his 100th career home run on Tuesday.

The 31-year-old Korean slugger belted a solo homer in the fifth inning off St. Louis Cardinals starter Joe Kelly (6-3), the Reds’ only run in a 6-1 loss.

It is his 17th homer of the season and 100th home run during his nine-year stint in Major League Baseball (MLB).

With the homer, Choo, who recorded his 100th career stolen base against the Milwaukee Brewers on Sunday, joined Ichiro Suzuki as the only Asian members of the 100-100 club (100 homers and 100 steals) in the major leagues. Suzuki, who recently set a mark of 4,000 combined hits in Japan’s Nippon Professional Baseball and MLB, has had 110 homers and 470 steals in his 13-year MLB career.

Choo, who played for the Cleveland Indians from 2006 to 2012, is also making the transition to a new position, center field. He’s now five homers shy of tying his single-season home run record, 22, which he set in 2010.