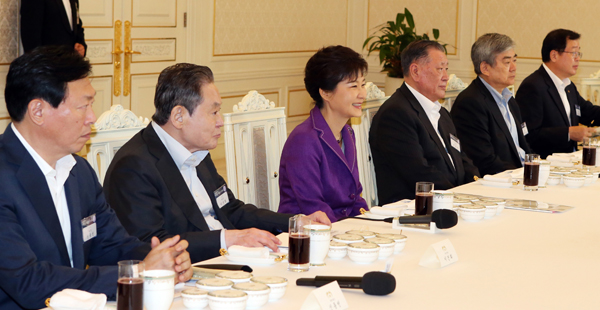 In a meeting with top conglomerate chiefs yesterday, President Park Geun-hye said the government will carefully review the proposed plan to revise the Commercial Act to ensure that her “economic democratization” plan is carried out according to its original purpose and not simply tightening regulations. The president also urged conglomerates to expand investment and hiring to help boost a domestic economy that has been struggling with low growth.

“The government will make sure that economic democratization is pushed based on its initial purpose and that it does not turn into merely a suffocating machine for large companies by imposing excessive regulations,” Park said yesterday. “We are also well aware of the concerns over the proposed revision of the Commercial Act, which has become a controversy, and we will promote [the revision] after conducting a careful review and hearing various opinions.”

Park’s comments were made at a luncheon with chiefs of the country’s 10 largest conglomerates, including Lee Kun-hee of Samsung Group, Chung Mong-koo of Hyundai Motor Group, Koo Bon-moo of LG Group and Shin Dong-bin of Lotte Group. Doosan Group Chairman Park Yong-maan, who is also chairman of the Korea Chamber of Commerce and Industry, and GS Group Chairman Huh Chang-soo, who is also chairman of the Federation of Korean Industries, also attended. Government officials at the event were Deputy Prime Minister Hyun Oh-seok and Trade Minister Yoon Sang-jick. It was Park’s first meeting with the conglomerate chiefs since her inauguration in February, although a group of conglomerate representatives has accompanied her on overseas trips.

Concerns have been growing in business circles over the Park administration’s push for economic democratization that calls for creating an environment where small and midsize companies can compete fairly in a market dominated by large companies. Conglomerates have indirectly expressed uneasiness over Park’s major campaign pledge, saying they could be discriminated against.

Businesses also worry about the proposed revision of the Commercial Act, announced earlier this month by the Justice Ministry. While the proposed revision is aimed at reforming overall corporate governance, it calls for stricter regulations on management, such as limiting the voting rights of large shareholders.

Industry insiders note that yesterday’s luncheon was held to soothe the business leaders about the government’s economic policies that many see as favoring smaller players.

“Now is the time for each company to carry out aggressive and pioneering investment,” she said. “Also, jobs can only be created out of the will of businesses, not the government.”

In response to her request, during the meeting FKI Chairman Huh said the country’s top 30 conglomerates will expand investment and employment from what they had initially planned earlier this year. He also said businesses have big expectations for government measures to revitalize the economy in the remainder of the year.

Yesterday, the Ministry of Trade, Industry and Energy released a report on the top 30 conglomerates’ investment and hiring plans based on a survey from Aug. 5-16.

According to the survey, conglomerates said they plan to invest 154.7 trillion won this year, which is up from the 148.8 trillion won plans made earlier this year. Also, they plan to hire 140,700 workers in the whole year, up from 127,700.