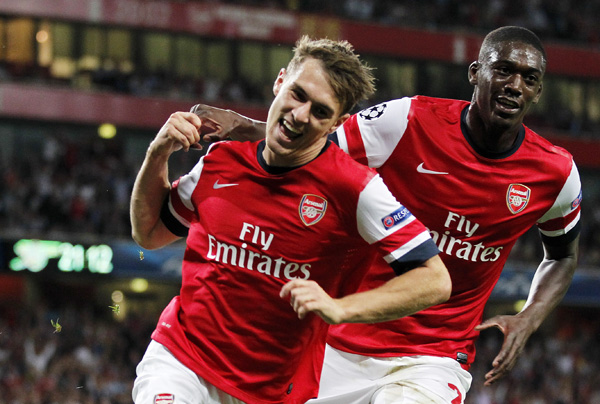 LONDON - Arsenal will play in the Champions League for a 16th consecutive season, and 10-man Schalke scraped into the group stage along with them after beating PAOK Salonika in a thrilling encounter on Tuesday.

With a 3-0 lead over Fenerbahce from the first leg, Aaron Ramsey netted twice at the Emirates Stadium to ensure Arsenal comfortably won the playoff 5-0 on aggregate.

“At the top level, the most difficult thing is to be consistent and of course it’s an achievement .?.?. but our ambition is much higher than that,” said manager Arsene Wenger, whose Arsenal side has never won European football’s biggest prize.

It was a nervier night for Schalke, which overcame U.S. midfielder Jermaine Jones being sent off to win, 3-2, at Salonika and advance 4-3.

Steaua Bucharest will be in the group stage draw for the first time in five years after drawing, 2-2, at Legia Warsaw to go through on away goals after the first leg finished 1-1.

Basel, already leading Ludogorets Razgrad, 4-2, won, 2-0, on home soil to cruise into Thursday’s draw, where it will be joined by Austria Vienna, which squeezed through 4-3 on aggregate, despite losing, 3-2, on the night at home to Dinamo Zagreb.

At the Emirates Stadium, Fenerbahce gifted Arsenal the lead after 25 minutes, with Ramsey providing the finish from close range.

The Wales midfielder, who scored in Istanbul last week, volleyed in another in the 72nd after being set up by Kieran Gibbs.

There had been a blow for Arsenal early in the second half when Lukas Podolski was carried off on a stretcher with a left hamstring injury that will rule the Germany forward out for three weeks.

“We paid a heavy price on the injury front because we lost Podolski,” Wenger said.

In Greece, Adam Szalai put Schalke in front before halftime after Atsuto Uchida squared the ball to him.

Stefanos Athanasiadis blasted in an equalizer for the resilient Salonika hosts at the start of the second half, and their chances of advancing appeared to have been boosted by Schalke being reduced to 10 men when Jones received his second booking for fouling Dimitris Salpingidis in the 64th.

Although Kostas Katsouranis headed Schalke level from Miroslav Stoch’s free kick in the 79th, Szalai struck again in the 90th to ensure Schalke will play in the group stage for the sixth time.

In Poland, Steaua looked to be cruising after Nicolae Stanciu and Federico Piovaccari scored inside the first nine minutes to put the visitors up 3-1 on aggregate.

But Legia Warsaw pulled one back in the 27th through Miroslav Radovic’s header, and Jakub Rzezniczak netted in the fourth minute of stoppage time at the end, but it came too late to prevent Steaua progressing on away goals.

Basel enjoyed the most relaxing night, with Fabian Frei knocking in a corner after 11 minutes and substitute Philipp Degen scoring with his second touch 11 minutes from the end.