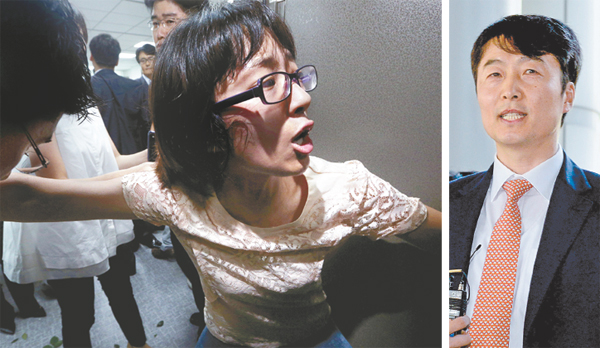 Left: A legislative staffer blocks the entrance to the office of Representative Lee Seok-gi at the National Assembly as officials from the National Intelligence Service try to raid it yesterday. Right: Lee appeared at the Seoul Central District Court on Monday to stand trial on an unrelated election law violation charge. [NEWS1]

The National Intelligence Service and the prosecution yesterday launched an unprecedented investigation into key members of the Unified Progressive Party, including Representative Lee Seok-gi, on charges of conspiring to overthrow the government and violating the National Security Law.

Sources from law enforcement authorities said yesterday that the nation’s main spy agency has obtained evidence that the 51-year-old proportional representative of the Unified Progressive Party and a group of hardliners, known as the Gyeonggi Dongbu Alliance, had conspired to commit insurrection, including a plan for an armed uprising.

It is the first time that a lawmaker in office was investigated for conspiracy to commit insurrection.

Lee fled the National Assembly before the raid and his whereabouts were unknown as of 8 p.m.

Under the command of the Suwon District Prosecutors’ Office, agents from the National Intelligence Service and police raided homes and offices of 10 UPP members. Seven homes and 11 offices of 10 senior UPP officials including Lee, Wu Wi-yeong, the party’s former spokeswoman who currently works as Lee’s aide, and Gyeonggi chapter head Kim Hong-yeol, were raided.

The Suwon District Court issued warrants for the raids and arrests of some officials on Tuesday. All the suspects were barred from leaving the country.

Three officials including Hong Sun-seok, deputy head of the Gyeonggi Chapter of the UPP, were arrested yesterday. The prosecution said it will take necessary steps to seek the National Assembly’s approval to take Lee into custody since he is an incumbent lawmaker.

According to the sources, Lee was accused of conspiring to commit insurrection under the criminal law and violating Article 7 of the National Security Law, which prohibits praising or expressing sympathy for North Korea.

Under the criminal law, a ringleader who “creates violence for the purpose of usurping the national territory or subverting the constitution” can be punished by death or lifetime imprisonment. Those who conspire with intent to commit the crime of insurrection will be punished by a minimum of three years in prison.

Violation of the National Security Law’s Article 7 can bring punishment of up to seven years in prison.

According to the sources, the National Intelligence Service submitted transcripts of Lee’s statements at a meeting, allegedly conspiring in an insurrection, to the Suwon District Court when it sought the warrants for the investigation along with and the code of conduct of the Gyeonggi Dongbu Alliance.

Lee attended the meeting of the Gyeonggi Dongbu Alliance in early May in Seoul, the sources said.

“When the decisive time comes, we should initiate a nationwide general strike and armed rebellion at the same time,” Lee was quoted as saying at the meeting. “We must gain control of the broadcasting and public facilities and disable communications and fuel facilities.”

He was also accused of telling members of the Gyeonggi Dongbu Alliance to prepare by securing firearms.

“We should gain control of a progressive political party in the South and make aggressive efforts to enter the National Assembly to prepare for a decisive moment,” the code of conduct of the Gyeonggi Dongbu Alliance was quoted as saying by the sources. “When the time comes, we will support [the North] through armed rebellions.”

The Gyeonggi Dongbu Alliance is a regional chapter of the Association for Democracy and Reunification of Korea, established in 1991 by members of the National Liberation Group, the largest faction inside the UPP. They are mostly former left-wing student activists who support North Korea’s juche (self-reliance) ideology.

The association officially began its political party activity in 2001 by joining the Democratic Labor Party, a predecessor of the UPP. Although the association was dissolved in 2008, the core members of the Gyeonggi Dongbu Alliance survived inside the UPP and gained control of the party over the recent years.

While the UPP denies that it is under the control of the progeny of the pro-North Korean faction, speculation continued that Lee is a key leader of the group. Lee became a proportional lawmaker of the UPP in the April 2012 legislative elections after he scored the most votes in a March primary of the party. Investigations later revealed that the primary was rigged, but Lee refused to give up his lawmaker seat.

Although the Saenuri and Democratic Party previously agreed to expel Lee and another UPP lawmaker, Kim Jae-yeon, also a member of the Gyeonggi Dongbu Alliance, from the National Assembly, the motion for their expulsion has been pending at a legislative committee since March.

It is rare for the law enforcement authority to apply charges of conspiring to commit insurrection under the Criminal Act. The last investigation on the charge took place in 1980 when the late President Kim Dae-jung was investigated by the Chun Doo Hwan regime. Kim was acquitted of the charges in 2004 in a retrial.

It is not the first time that Lee was involved in an antistate case. He was arrested in 2002 on an espionage charge and was sentenced to serve two years and six months in prison for creating an antistate organization in violation of the National Security Law. He was granted a presidential pardon later that year.

Two years later, his eligibility for election was restored through another presidential pardon, allowing him to run for office.

The UPP yesterday fiercely resisted the investigation. When the National Intelligence Service tried to enter Lee’s office at the National Assembly around 8:10 a.m., UPP lawmakers and party officials fought to block about 20 agents from entering the room. The confrontation continued through the day.

UPP Chairwoman Lee Jung-hee held a press conference around noon in the hallway in front of Lee’s office to denounce the actions. She said the investigation was a Park administration scheme to oppress progressives. “This won’t just remain as oppression against the UPP,” Lee said. “The ruling side argued during the last presidential election that all the voters supporting the opposition are pro-North. This investigation is an attempt to label all the democratic force as rebels and remove them by political oppression.”

Hong Seong-gyu, spokesman of the party, said President Park has begun an autocratic rule following her father Park Chung Hee’s dictatorship. “We are issuing a stern warning to President Park,” Hong said. “If you think you can gag the people with guns and swords like in the 1970s, it is a grave miscalculation.”

The main opposition Democratic Party reacted carefully. “The Democratic Party is paying close attention to the National Intelligence Service’s raid against an incumbent lawmaker,” the DP said in an official statement. “We will observe the situation further to express our position.”

The Saenuri Party said the allegations of high treason must be investigated thoroughly.

“Representative Lee was accused of committing anti-state activities for years and he is now on the run,” said Representative Yoo Il-ho, spokesman of the conservative ruling party. “It is beyond shocking. I am terrified. The National Intelligence Service and the prosecution must conduct a thorough investigation, taking into account the shock to the people and its impact on society.”

The Blue House said yesterday it was also shocked. “I learned about the investigation through news reports,” said Lee Jung-hyun, senior secretary to the president for public relations. “How can this happen? If it is true, I cannot hide my astonishment.”

Lee said he had not heard President Park’s reaction, but he believed she was briefed about it since it is a grave matter.