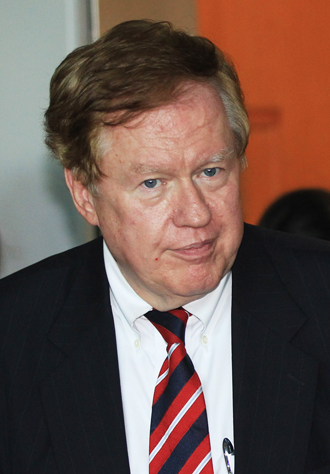 Kenneth Bae, an American sentenced to 15 years of hard labor in North Korea in April, will be the topic of discussions in Pyongyang between North Korean officials and a U.S. special envoy, who will travel there on Friday to seek his release.

Robert King, the U.S. special envoy for North Korean human rights issues, plans to seek a pardon and special amnesty for Bae, 45, on humanitarian grounds. The U.S. State Department added in a statement Tuesday that it hoped Bae could be reunited with his family and obtain medical treatment.

Showing the importance Washington is putting on the issue, the White House issued its own statement the same day, which said in part, “We urge the government of North Korea to grant special clemency to Mr. Bae immediately and allow him to return home with Ambassador King.”

King was invited by the North Korean government. He will leave tomorrow from Tokyo, the last stop on a 10-day round of consultations in the region. This visit will be the first official visit by a U.S. official to North Korea in more than two years, and the first during the Kim Jong-un regime.

“The U.S and North Korea have been in close consultation regarding the release of Kenneth Bae,” a Washington diplomatic source said. “This North Korea visit’s purpose is separate from issues involving the North’s nuclear problem and is humanitarian.”

Bae, a tour group organizer and Christian activist, has been held in North Korea since November, and on April 30 was sentenced to 15 years of hard labor by the North’s Supreme Court. He was found guilty of “anti-regime activities.”

He was leading a tour group through Rason, the North Korean special economic zone bordering China and Russia, when he was arrested.

Washington has called publicly for his release on several occasions since Bae was sentenced. During his imprisonment, he has suffered from deteriorating health and has lost 50 pounds, his family told the media. Terry Chung, his sister, told several news outlets that he is suffering from a heart condition, chronic diabetes and back and leg pain and has been moved to a hospital.

Earlier this week in Seoul, King denied that he had plans to visit North Korea, but foreign affairs officials here say they have been in touch with him regarding a possible trip. North Korea has in the past held other U.S citizens, often drawing high-profile American envoys to negotiate their return.

The American journalists Laura Ling and Euna Lee, for example, were arrested and sentenced to 12 years each of hard labor in 2009 for trespassing and committing unspecified “hostile acts against the country.” Former U.S. President Bill Clinton negotiated their release five months later.

In January 2010, former U.S. President Jimmy Carter flew to Pyongyang to negotiate the release of Aijalon Gomes, an American teacher who walked into North Korea from China. Gomes and Carter left North Korea together.