Pohang gets into K-League Classic

Pohang gets into K-League Classic 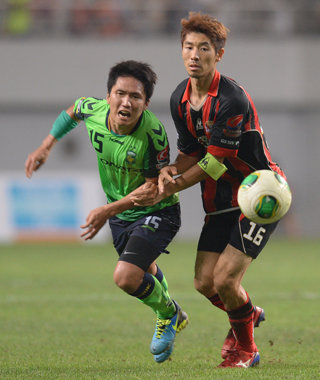 Even a loss to Ulsan Hyundai could not keep the Pohang Steelers from sealing their first-place position into the second half of the season as the Jeonbuk Hyundai Motors dropped valuable points in another big Wednesday match with FC Seoul.

The Steelers lost to Ulsan, 2-0, in the second-to-last round of the first half of the K-League Classic, but they still remained four points clear of the Motors, who were held to a 1-1 draw by FC Seoul. Ulsan, which tied with the Motors at 45 points, leapfrogged to the runner-up position on goal difference, while FC Seoul retains a chance to challenge them with 43 points.

The Korean top-flight football league will mark its midseason point after the 26th round, scheduled on Sunday. The seven top finishers through Sunday will move into an elite group, where they will vie for the championship title, while the bottom seven teams will embark on their own race to survive two-team relegation at the end of the season.

The final berth to the top-seven-team group is still wide open as only one point separated Busan I’Park, Seongnam Chunma and Jeju United in the middle of the table. Jeju set the stage for a dramatic final round rally by beating Busan, 2-1, and moved within a point of its seventh-place southern regional rival. Seongnam also kept its hopes alive with a 2-0 victory over Gangwon FC. Seongnam and Busan are tied with 37 points, but Seongnam trails Busan on goal difference.

At Seoul World Cup Stadium, Dejan Damjanovic became the only player to score at least 10 goals for seven successive years at the K-League with a goal in the 61st minute that salvaged the host a point. Kevin Oris put Jeonbuk in front in the 57th minute.

The equalizer, Damjanovic’s 10th goal of the season, put the Montenegrin striker ahead of Kim Do-hoon, an assistant coach for Gangwon, who scored at least 10 goals per season between 2000 and 2005.

Kim Young-sam and Han Sang-wun scored in each half, earning Ulsan a home victory over its eastern coastal rival Pohang. That extended Ulsan’s unbeaten streak to seven and stopped Pohang’s at seven.

In Incheon, the Suwon Samsung Bluewings grabbed a chance to rally with a 66th-minute equalizer by Natanael de Souza Santos Junior, but fellow Brazilian Diogo da Silva Farias and Han Kyo-won struck to regain and keep Incheon United’s lead for the hosts’ 3-1 win. Midfielder Lee Seok-hyun put Incheon on the scoreboard only a minute into the game.

With the victory, Incheon jumped into fifth place with 41 points and secured a seat in the elite group in the split second half, which is expected to start without a break. The Steelers are a point behind in sixth place.

Busan failed to reduce a three-point gap with the Bluewings, thanks to Luis Carlos dos Santos Martins, who led Jeju’s rally with two goals at Busan Asiad Main Stadium. Kim Ik-hyun gave the hosts a 1-0 lead in the 36th minute, but Jeju’s Brazilian forward struck an equalizer in the 56th and netted the winner in the 60th.

At Tancheon Stadium in Seongnam, Ivan Vukovic put the hosts ahead of Gangwon in the 68th minute, and Kim Dong-sub struck an insurance goal with a minute left, adding three points to Seongnam, which won 11 points in five recent games.