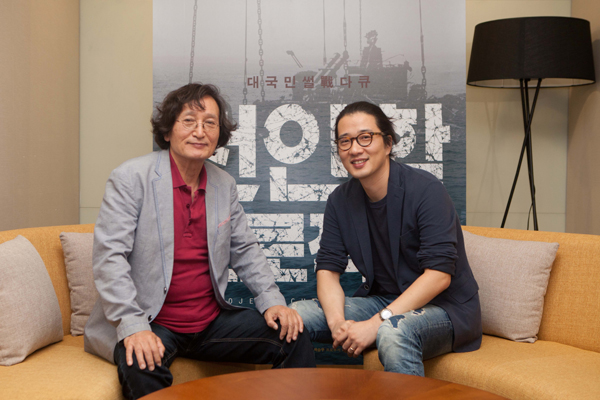 On March 26, 2010, South Korean warship Cheonan sunk off the west coast near Bangnyeong Island, killing 46 people. The government said the sinking was caused by a torpedo attack launched by North Korea - but many doubt the official story.

One of those doubters is documentary filmmaker Baek Seung-woo. He was so unhappy with the government’s explanation that he made a feature-length documentary, “Project Cheonan Ship,” which opens in theaters Sept. 5 and explores the incident by trying to debunk the official conclusion.

“I didn’t make the film to define or conclude the cause of the sinking,” said Baek, at a press conference Tuesday at the COEX Megabox theater in southern Seoul. “I just wanted to throw in a question on why they [the South Korean government] don’t explain reasonable questions.”

Although it has been more than three years since the sinking, emotions still run high. Three naval officers and the relatives of several sailors killed in the tragedy filed a court injunction on Aug. 7 to prevent the film from being released, saying it distorts the truth and insults the memory of the dead sailors.

But the movie’s producer, Chung Ji-young, says they never intended to insult anyone, and far from distorting the truth, they are just asking questions.

Chung is a veteran filmmaker famous for his politically charged movies, such as “Unbowed” and “National Security.”

“I decided to produce the film after watching a shocking discussion on TV that seemed to say that anyone who voiced suspicions about the official story was a pro-North Korean follower,” Chung said, adding that he invited the people who filed the injunction to watch the movie, but they did not accept his offer.

“Project Cheonan Ship” made its debut at the Jeonju International Film Festival in April.