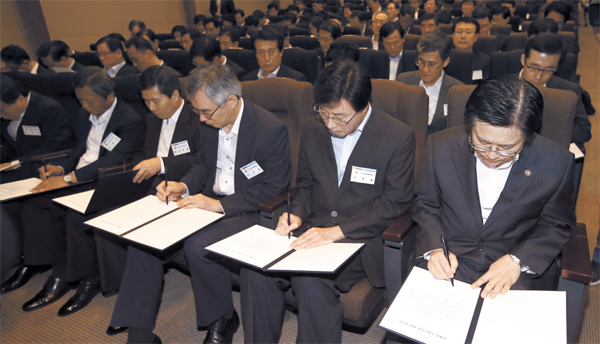 As part of efforts to burnish its tainted image, the National Tax Service yesterday unveiled a set of reform measures that includes banning its high-level officials from personal contacts with executives of companies and creating a deliberative body that inspects and advises the agency to be fair and transparent when carrying out its tax-related policies.

“I am very sorry to have caused people too much concern over a disgraceful incident involving the NTS as has been reported by the media,” said Lee Jeon-hwan, deputy NTS commissioner, yesterday. “Thinking that it is our priority to recover people’s trust to be able to carry out tax administrative policies smoothly, we came up with sincere reform measures after holding several debates.”

Earlier this month, the Seoul Central District Prosecutors’ Office indicted Jun Gun-pyo, a former NTS chief, for taking bribes from CJ Group and Heo Byung-ik, a former deputy commissioner at the tax service, on charges of helping Jun get the bribes by arranging a meeting with a conglomerate executive. Song Gwang-jo, former chief of the Seoul tax office, also was accused of accepting rounds of golf in return for helping CJ Group avoid a tax audit.

The incidents sparked criticism of the credibility of officials responsible for the making tax policy and of the agency itself.

According to the tax agency, the key part of the measures announced yesterday is the move to ban tax officials from inappropriate meetings with private sector executives. It said that high-level officials at the NTS, including the commissioner and director-generals, will restrict private contact with company officials, and it will ban officials from meeting personally with shareholders, executives and advisers from the country’s top 100 businesses by sales. And if there are violations of the policy, the NTS said it would impose harsh punishments.

Personal contacts, according to the tax agency, refer to activities like dining out and playing golf.

Industry insiders note that a ban on meeting officials from the top 100 companies actually means NTS officials should not meet with any business individuals for private occasions whatsoever to avoid any kind of suspicion and misunderstanding.

“The level of punishment hasn’t been decided,” Lee said. “But the more private contacts tax officials have with company officials, the harsher disciplinary action they will receive.”

Meetings dealing with official business, however, will be allowed to take place at either the NTS or company offices.

The reform measures also include setting up an inspection team within the agency to exclusively investigate high-ranking government officials suspected of receiving bribes in exchange for favors, and also establishing a deliberative committee to look into tax investigations overall. More than half of the committee members will be from outside the agency to enhance fairness and boost transparency.

“The reason why the tax agency decided to establish a deliberative committee is to brush off concerns people have over the NTS conducting tax investigations arbitrarily,” Lee said.

Meanwhile, a joint survey by the JoongAng Ilbo and East Asia Institute showed that although the NTS’s ranking in terms of its influence jumped from ninth in 2011 to seventh last year, its confidence ranking fell from seventh to eleventh over the same period.

“Whether or not the reform measures will work out [in restoring the credibility of the NTS with the public] will be left up to high-level officials,” said NTS Commissioner Kim Duk-joong. “From today on, I myself will not meet privately with officials from large companies.”