Drama seen as therapy for some at-risk youths

Drama seen as therapy for some at-risk youths 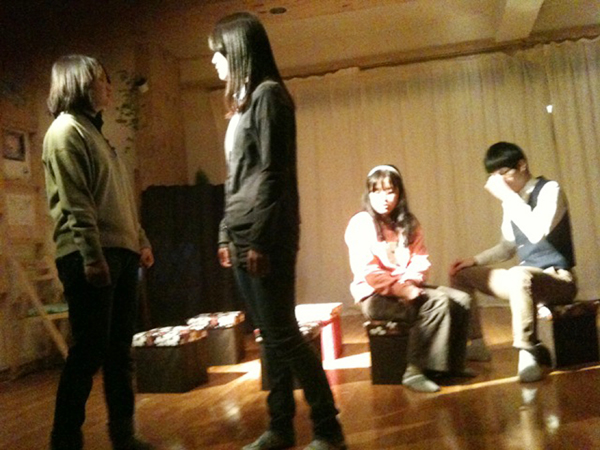 Students during a drama therapy session at the TiAT Center in Sillim-dong, southern Seoul. Provided by TiAT Center

Early in June, about 50 middle school students from different parts of the country - mostly 14-year-olds who are considered to be “problematic” - gathered in a hall at Yongin University in Gyeonggi. They were not there to be punished, but for two nights and three days of drama therapy, a new method of treatment selected by the Ministry of Culture, Sports and Tourism to deal with school violence.

(Devil and Angel appear as A takes B by the collar) Devil: What are you waiting for? Just hit him.

Angel: No. Think about the friendship you guys had so far. Think about your parents at home. What would they think?

These are part of the lines for a play that was staged during the drama therapy camp from May 31 to June 2 by the participating students who are either victims or bullies of school violence, most of whom were forced to join the camp upon the request of schools or parents. About 60 drama therapists and staff members who are learning drama therapy managed the students, who were divided into groups of six. Victims and bullies of school violence were mixed in each group. 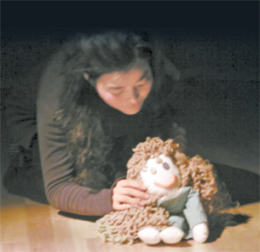 Drama therapy also uses other objects such as dolls to express one’s inner self, according to drama therapist Han Myung-hee. Provided by TiAT Center

Drama therapy camp for “problem” students has been organized every winter by the Korea Association of Drama Therapy. However, the association organized an additional camp this summer at the request of the Ministry of Culture, Sports and Tourism, which decided to sponsor it. According to the KADT, ministry officials read in a newspaper about the drama therapy camp that was held last winter and decided to support it beginning this year.

According to the ministry, the drama therapy camp “ended successfully bearing meaningful significance.” Although there’s no “digitized figures to show whether the camp has an effect on students to prevent violence,” the ministry said it has received positive feedback from the students who said: “Through exercises to help me express my feelings and think about other people’s positions, I noticed that my habit of hitting people has decreased,” and “There were times that participating in the camp was boring, but I found out what I want to become during the camp.”

A ministry official said that compulsory school violence education across the country that has focused on group lectures has been “ineffective, debasing students’ concentration,” adding that they decided to deal with school violence “by using methods such as drama therapy, which stimulates students’ sensitivity.”

Melding arts and therapy in the field of medicine has existed for decades. Art therapy and music therapy have been more common, however, in recent years, drama therapy has been grabbing Koreans’ attention. Since 2005, about half a dozen drama therapy associations have been established in Korea, and they’ve been issuing their own certificates to drama therapists.

The Korea Association of Drama Therapy, which was established in 2005, has been organizing camps for disabled children and their siblings and mothers every summer and for “problematic” students every winter since its first year of establishment. Drama therapy, according to the association, is the use of theater techniques to help people with their mental health.

Although people doubt a three-day camp can be effective, Ko Eun-sook, 33, a drama therapist registered with KADT, says it is.

“Excluding the time when students eat and sleep, they have to follow the programs led by professional drama therapists. For disabled students, it’s difficult to see behavioral changes instantly but for regular students who are at the camp because they are bullies or victims of school violence, their experiences act as a motivation - a motivation to change. The fact that they realized that they can change is important.”

Ko has been a drama therapist for seven years and has participated in all the camps organized by the association.

“At first, they don’t want to participate, as most of them were forced to come to the camp. But they are totally different when they leave the camp,” said Ko. “One student who was at the recent camp in June said while leaving that he never knew that he could be this friendly with an adult, as he was a troublemaker at school and at home, with teachers and parents. That’s a dramatic change for him - realizing that he can be friends with adults. Of course, when he goes back to school or home, he’ll act the same. He’ll resist teachers’ authority or may not listen to his parents. But realizing that not all adults are the same and that he, too, can form a good relationship with adults is a start. That’s a big accomplishment for us because he remembers performing and playing with us.”

After the drama therapy camp, Park Jong-gil, vice-minister of the Culture Ministry, visited a middle school in Seoul and watched a musical, “A Ghost Friend,” with the students and then talked to school officials about developing programs for students to deal with school violence through creative arts and drama therapy. The ministry said it will visit middle and high schools in Seoul, Gyeonggi, Incheon, Daejeon and Gangwon and show students the musical, and in the meantime, figure out more detailed programs as they’ve realized that “creative arts and drama therapy have proven to be more effective ways to deal with such issues.”

The Korea Association of Drama Therapy has been training students to become drama therapists and giving out certificates to qualified students since 2006. So far, 80 students have received the certificates.

Kim Kyu-jin, 29 became an actor through SBS’ annual talent search in 2009. He was a supporting actor in numerous dramas, however, failed to land leading roles or sign contracts with filmmakers as he had hoped. His life as an unknown actor gave him a low self-esteem, followed by a panic disorder. He abandoned everything and decided to treat his illness through drama therapy by learning about it.

“I thought drama therapy was all about psychodrama at first but it was totally different. While learning about drama therapy, I was healed and I wanted to help others like me by becoming a drama therapist,” said Kim, who obtained a certificate early this year.

However, drama therapists in Korea have voiced concerns that many Koreans misunderstand the real meaning of drama therapy.

“Most of them think of psychodrama as drama therapy but that’s only a small part of it. Of course it’s a process of drama therapy settling down in Korea but it should be done properly, otherwise it’s quite dangerous,” said Han Myung-hee, a drama therapist.

According to Han, who works at the TiAT Center in Sillim-dong, southern Seoul, said some of her students had to stop receiving sessions at the center because the Seoul Metropolitan Office of Education excluded drama therapy as “therapy.” Each month, the education office has been giving out vouchers worth 120,000 won ($108) to students from lower-income households to receive special education such as arts, music, language and drama therapies, however, drama therapy was excluded from the category with the reasoning that drama therapy lacks a “therapy aspect.”

“I was really upset and the parents of these students, who are victims of school violence, submitted signatures to the education office, but nothing worked. One mother even said, ‘What kind of help will my child, who is bullied at school, receive for getting a language therapy?’ I couldn’t say anything because I couldn’t help her in any way.”