Role-reversal only a small part of process

Role-reversal only a small part of process 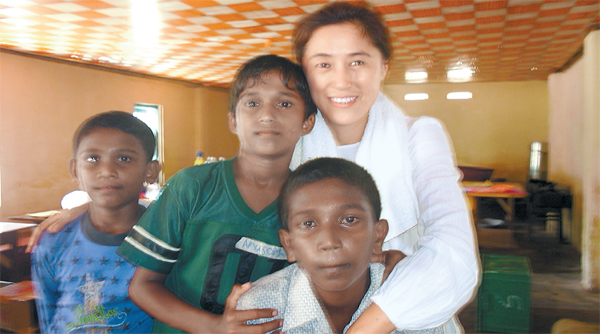 Han Myung-hee, director of the TiAT Center in southern Seoul. Provided by the center

Many Koreans request drama therapists like Han Myung-hee, 47, to fix up a problem child or resolve a conflict between spouses through a session of role-reversal “drama therapy” they often witness on morning television shows. Such programs show a husband and wife, for example, in tears and embracing each other after a role-reversal session, saying they’re sorry and how they understand each other now. The role-reversal session is one of the many techniques used in psychodrama, which is “only a small part such a large spectrum of drama therapy,” says Han.

However, Han said, as more Koreans are exposed to such programs, “they believe just a couple of sessions can fix up a problem or even think they can try it on others without having any knowledge of psychology or drama therapy. It’s a dangerous conceptualization. I’ve heard so many times from clients who visit me why I don’t allow them to have such a session saying, ‘It seems to work pretty well for the couple in the television.'”

Han, a U.K. State registered drama therapist working in Korea, has been running the TiAT (Theatre in Arts and Therapy) Center in Sillim-dong, southern Seoul since 2007. After getting trained at the University of Hertfordshire in England, she returned to Korea and is considered a pioneer in the field. Han has been working hard to train and properly promote drama therapy in Korea, however, she says, “Most Koreans have a very different understanding of what drama therapy really is.”

A. Yes. All the time. Even the students who want to become drama therapists have the wrong idea at first. Drama therapy is like a group or individual therapy, like a psychology consultation but using artistic methods such as drama as one of the techniques. About a month ago, we had a request from the Gwanak District Education Office to fix a group of students who had beaten up a teacher. They requested five sessions of the role-reversal programs I mentioned earlier so that students can “feel what it’s like to be in the teacher’s shoes.” Their objective was to allow the students to realize after the role-reversal sessions that, “Oh, my teacher must have felt bad because I acted such a way. I’ll never act like that any more.” But for us drama therapists, it doesn’t work like that. We first have to talk to them and understand them and figure out why they act in such a way. There are so many things to understand before starting any kinds of activities or programs. Moreover, these students are problem students at school. They disregard the teachers’ authority but we - the drama therapists - are also called teachers. Do you think they’ll suddenly start playing the role of a bad student or their teacher if we ask them to do? They’ll become more resistant to obey the teachers’ orders, thinking, “They are judging us. They are criticizing us. They think we are bad students and they are trying to fix us.” But the officials from the education office didn’t understand it, no matter how much I explained this to them. We took the sessions partly our way and to my surprise, the students who didn’t even want to participate for the first couple of sessions tried to help us organize the class at the fifth session. We managed to partly conduct the role-reversal session the officials wanted. They’ll go back to their usual behaviors at school because the teachers there are the same. The situation is the same. But the fact that they realized that all teachers are not the same and that they can behave in a different way than violence makes me feel thankful.

When I was young, I was severely exposed to family violence. Whenever I heard my father’s footsteps, all my family members had to hide under a blanket. He turned our house upside down every other day, and I realized that I had to look after my mother and my younger brother when I was a middle school student. So since I was young, I always wondered about the purpose of life.

When I went to high school, I had this moment when I didn’t talk. I just didn’t talk unless I had to. So I was a weirdo at school who had good grades but didn’t talk. But one day, I registered for a drama class at school and it changed my identity, I guess. I was a weird girl at school but onstage, I was this sexy actress. Although I had that catharsis moment, I wanted to kill myself when I was a senior in high school. I didn’t know what to do with my life as my reality stayed the same. I failed to kill myself or become a nun, so I went to university, majoring in philosophy. But I didn’t have a vision, so I joined a drama club and spent my early 20s doing theater plays. Naturally, I got interested in the field of arts being used as a therapy, so I decided to be trained in the U.K. There, I realized that my psychological wounds from my youth were cured through the learning process. After obtaining the license, I enjoyed working there, but I knew I had to come back to Korea to find my roots. Since then, I’ve been proliferating drama therapy by holding workshops and publishing journals, however, I realized the necessity to train drama therapists properly so I decided to open up the center.