Renault Samsung ready for a U-turn

Renault Samsung ready for a U-turn

Renault Samsung Motors produces the SM5 sedan at the company’s plant in Busan. The automaker recently resumed overtime work to boost production to meet growing demand. The SM3 compact and new turbocharged SM5 TCE have been solid sellers. Provided by the company

Renault Samsung Motors is poised to bounce back from slumping sales with a solid performance by its newest models and an influx of industry front-office heavyweights.

The Korean unit of French automaker Renault has seen declining sales for the past few years. As of the end of July, RSM had sold 68,789 units worldwide, down 26.8 percent from a year ago. It has dropped behind Ssangyong Motor to become Korea’s lowest-selling domestic automaker.

Nevertheless, there are signs the situation for RSM may be improving.

RSM was the first local automaker to reach an agreement with its union, while the company’s Busan plant resumed overtime work to boost production of the popular New SM5 Platinum, the face-lift of its midsize SM5 sedan. 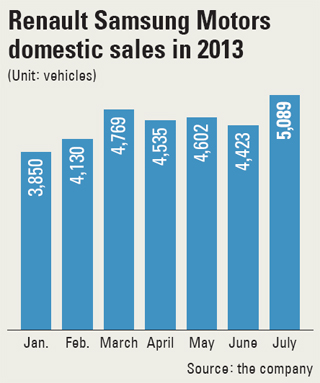 Meanwhile, RSM released the SM5 TCE turbo in June, the first domestic midsize model with a high performance, low-emission engine. The vehicle comes with a 1.6-liter (0.4-gallon) direct injection turbo-charged engine that produces 190 horsepower and has maximum torque of 24.5 kilogram-meters (177.2 pound-feet), along with six-speed dual clutch transmission made by Germany’s Getrag.

“After the release of SM5 TCE, the number of customers visiting our shops is increasing and this creates a positive atmosphere among our sales people,” said Kim Sang-woo, a director at RSM’s sales division. “We hope to keep up this pace and set a more aggressive marketing plan to expand our domestic sales.”

RSM expects that demand for its SM5 TCE will remain strong with Korean drivers paying much more attention to fuel efficiency. According to the company, the turbocharger on the 1.6-liter GDI engine boosts power by 36 percent, about the same as a 2.5-liter engine, and offers impressive combined fuel efficiency of 13 kilometers (8 miles) per liter. Kia Motors’ K5 Turbo, which is considered a competitor of the SM5 TCE, gets 10.3 kilometers per liter.

In addition to the SM5 TCE, sales of the compact SM3 have been growing steadily this year, from 1,261 in January to 2,110 in July.

Industry insiders see the SM3 sales as something of a surprise since this year’s model was released with no significant changes in design or performance. RSM has aggressively marketed the SM3 by using top actress Lee Na-young in commercials and emphasizing the SM3’s fuel efficiency (15 kilometers per liter) and roomy interior.

“The SM3 is the car that can attract customers, from first-time buyers to old people,” said Joo Soo-yeon, RSM’s marketing chief. “Because it is a product with many benefits, attention from the market has been steady.”

RSM has a goal of attaining a 10 percent market share, and the company is looking to finish strong in 2013. The electric SM3 ZE is scheduled to be released in October and the small SUV QM3 will debut by the end of the year.

While the SM3 ZE will not mean a big bump in sales, the QM3 is already attracting attention. The re-badged version of the Renault Captur was voted best vehicle at this year’s Seoul Motor Show.

Not only is the company releasing new models, it is beefing up its organization by bringing in two high-profile executives.

The company last week announced that Park Dong-hoon, managing director and CEO of Volkswagen Korea, will be its vice president in charge of sales and marketing. The 61-year-old will start next month.

Park has been in the imported car business in 1989, when he was in charge of Volvo at Hanjin Group.

Since 2005, Park has worked for Volkswagen Korea and served as chairman of the Korea Automobile Importers and Distributors Association (Kaida) from 2005 to last year.

The 46-year-old previously worked for Daewoo Motors, which later was sold to General Motors and changed its name to GM Korea, since 1992. He was with Chrysler Korea from 2004-11.

“Renault Samsung Motors will keep introducing models that can meet customers’ demands through new technology and innovation,” said RSM CEO Francois Provost. “We will put our best effort into becoming an innovative and trendsetting company.”