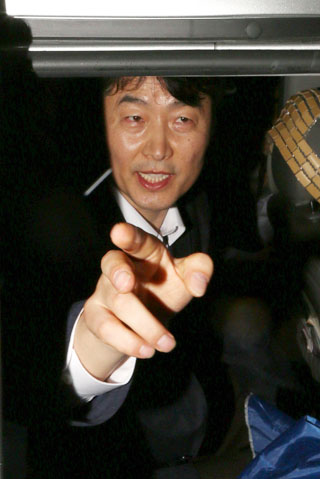 Representative Lee Seok-gi gets in a car yesterday after meeting with other UPP leaders in the National Assembly. He vehemently denied the insurrection conspiracy charge. By Kim Hyung-soo

Unified Progressive Party Representative Lee Seok-gi publicly denied charges that he tried to foment an armed overthrow of the government on behalf of North Korea, saying the government was trying to oppress freedoms in South Korea.

Lee also denied that he had tried to escape Wednesday when agents of the National Intelligence Service and police raided homes and offices of UPP members with warrants from the Suwon District Court. He said he remained in Seoul Wednesday night but did not elaborate further.

Lee allowed his own office at the National Assembly to be searched yesterday by NIS agents and for himself to be frisked. He said he wanted to “close this case as soon as possible to teach a lesson to the National Intelligence Service.”

“In the end, the National Intelligence Service will dig its own grave,” Lee said as the NIS stepped up its investigation into the activities of an alleged pro-North group in the UPP led by Lee and its ties to Pyongyang. The group was allegedly disguised as a hiking club.

The National Intelligence Service raided 18 homes and offices on Wednesday linked to 10 UPP members, including Lee, and arrested three party officials. The nation’s main spy agency said it obtained evidence that the 51-year-old proportional representative and a group of hard-liners known as the Gyeonggi Dongbu Alliance had conspired to commit insurrection, including a plan for an armed uprising. Lee, who has two past convictions of anti-state activities, is immune from arrest as a legislator while the Assembly is in session. Lee is the first sitting lawmaker in Korean history to be charged with conspiracy to start an insurrection.

Lee’s whereabouts were unknown until he came to a UPP leadership meeting yesterday at the National Assembly around 8:30 a.m. At the meeting, he accused the NIS of trying to divert the public’s attention from allegations that the agency interfered in last year’s presidential election to support President Park Geun-hye.

Lee also addressed the press briefly after the meeting. Asked about the allegations that he had ordered the Gyeonggi Dongbu Alliance to prepare firearms for attacks on major infrastructure installations, Lee said, “That is a fiction. It came from the National Intelligence Service’s imagination.”

The UPP issued a statement insisting on its members’ innocence and vowed to fight against the “irrational McCarthyism” of the conservative Park administration.

Lee Jung-hee, UPP’s chairwoman, said the party will start an all-out fight by operating its 16 chapters nationwide under an emergency plan.

She said the party will also hold nighttime protest vigils with candles to call for the dismissal of the NIS director and the dismantling of the spy agency. She said party members will gather in front of NIS headquarters tomorrow.

Meanwhile, the NIS began tracking down financial records of the suspects including Lee. Sources close to the investigation said they were trying to gather evidence to prove the suspects’ links to North Korea.

According to the law enforcement authorities, the NIS concluded that an underground Revolutionary Organization, or RO, inside the UPP has conducted nationwide activities for years. Lee was believed to be a leader of the organization, and local media reported yesterday that the group disguised itself as an alpine hiking club.

In addition to the 10 suspects whose homes and offices were raided Wednesday, the investigators also looked into financial transaction records of other RO members, the sources said.

“The RO was formed in 2004, so we believe a large amount of funds flowed into the organization,” said an official from the investigative authorities. “There is a high possibility that they raised money through CN Communications, an election campaign PR agency operated by Lee. We also have some suspicions about other money sources.”

Through the raids into Lee’s house on Wednesday, the agency found 140 million won ($125,747) in cash, and it is looking into the source of the money. The UPP said Lee intended to use the money to pay security deposits for his properties.

The suspects were accused of plotting a nationwide strike and an armed uprising. They allegedly planned to attack police stations and armories.

According to law enforcement sources, the investigation into Lee and other members of the Gyeonggi Dongbu Alliance has continued secretly since 2010.

The intelligence service obtained warrants to investigate the suspects by presenting a transcript of a meeting of the Gyeonggi Dongbu Alliance that took place in early May in Seoul, the sources said. At the meeting, Lee and 130 other participants, including two other UPP lawmakers, allegedly sang a North Korean military anthem, sources said. Lee was also accused of ordering the members at the meeting to “make physical and technical preparations for wartime.”

The NIS yesterday questioned the three arrested UPP members and said it will soon seek warrants to detain them further. The agency also sent a subpoena to another suspect, Kim
Geun-rae, deputy head of the UPP’s Gyeonggi chapter, to appear for questioning by 9 a.m. today. The Saenuri Party yesterday stepped up its pressure on the UPP. Representative Rhee In-je said if the insurrection charges were proven, the UPP must be dissolved for undermining the basic order of a democratic society.

The main opposition Democratic Party yesterday tried to keep its distance from the leftist opposition party. While demanding a thorough investigation into the allegations, the party said it will not participate in candlelight protests organized by the UPP. It also said it will continue its efforts to reform the NIS separately from the UPP. The Parliamentarians’ Society of Korea, an association of former lawmakers, yesterday held a press conference and demanded an immediate expulsion of pro-Communist lawmakers from the National Assembly.